Picea orientalis 'Skylands' is a robust, symmetrical, upright, tree form of Caucasian spruce with tiered branching holding fantastic golden needles held tightly against the stem. Older, interior foliage is more of a species-typical deep green in color — the contrast is striking. In spring, the display is amplified with the emergence or cherry-red pollen and seed cones. 'Skylands' is truly an exceptional plant.

When young, plants critically need shelter from intense sun until roots completely develop. In fact, immature specimens burn so badly that many "give up" on them. Gardeners have been known to erect sun shelters to protect their young trees from the sun. Once mature, the plants are quite tolerant of full sun.

This cultivar was "found" in 1950, growing at random at Skylands Gardens, part of the New Jersey Botanical Gardens at Ringwood, New Jersey, now known as Ringwood State Park. In the past it was sometimes seen listed under the cultivar name, 'Aurea Compacta.' However, 'Skylands' has become so popular over time that this is not likely ever the case today.

Skylands seedlings. Over the years, 'Skylands' has been a productive and successful seed parent for many of the dwarf, golden Picea orientalis cultivars in the trade. The most notable of which is Firefly, which was introduced in the early 2020s by Iseli Nursery. Others include 'Aebel Skylands Seedling' (a Buchholz Nursery introduction), and 'Sunrise' (from Bob Fincham at Coenosium Gardens). Pictured to the left is David Noline, who obtained Skylands seed from the ACS' Seed Exchange Program to a pleasing result. 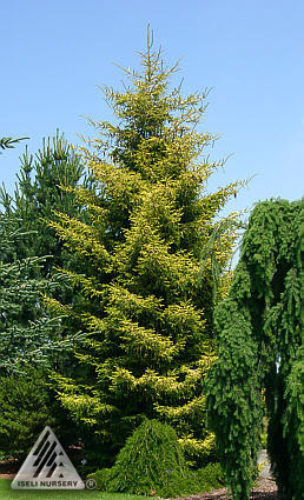 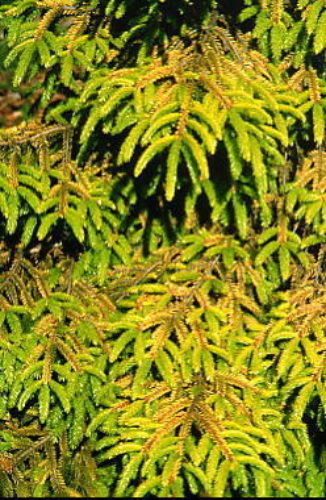 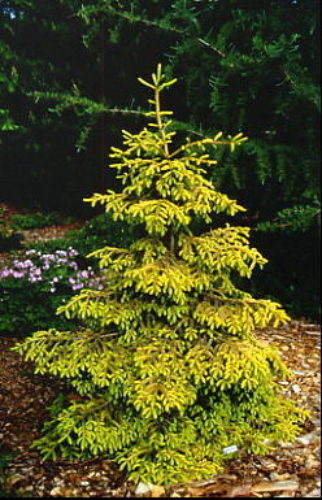 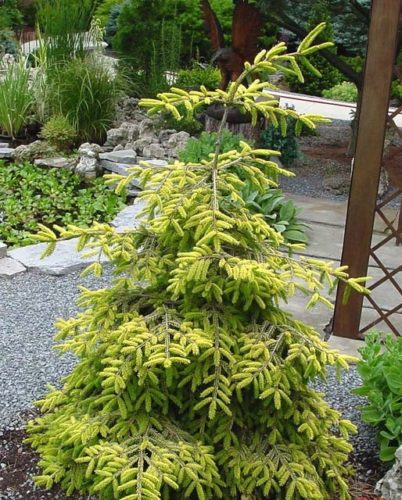 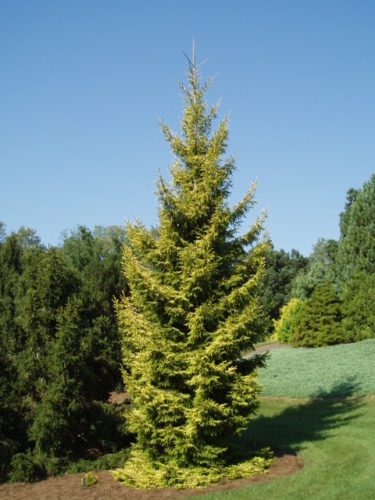 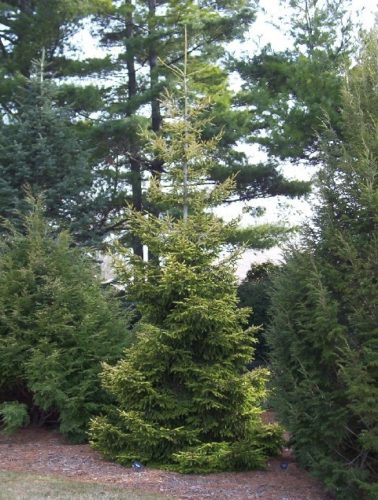 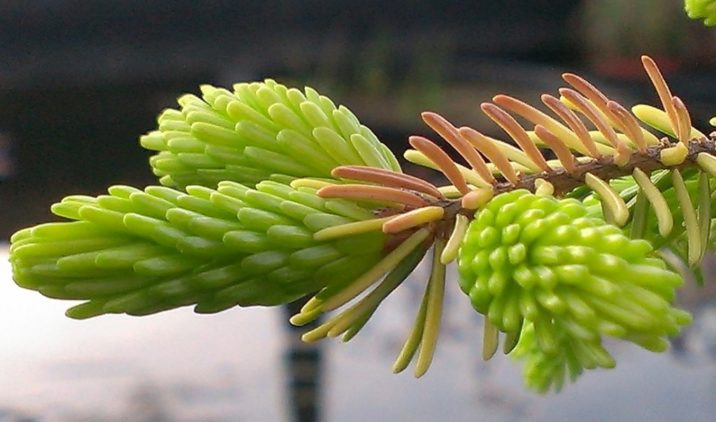 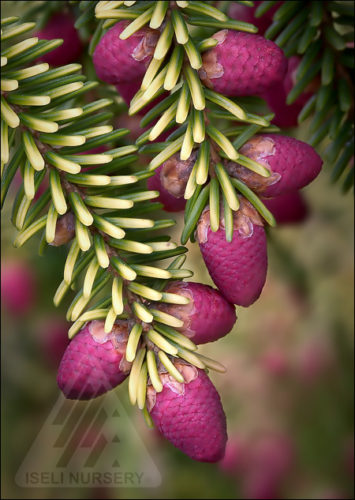 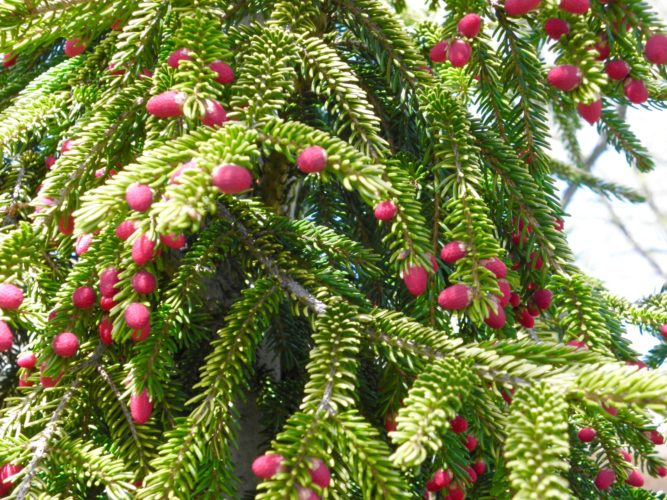 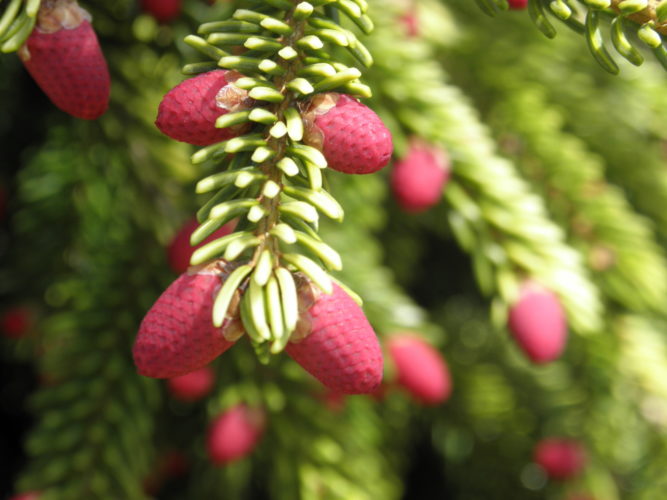 Hi,
We planted a Picea orientalis 'Skylands' 3-4 years ago. It was probably about 4 feet tall at the time. It has grown 5 feet since that time. This is a much greater growth rate that we expected and we are concerned that the tree will become too large for its site. The first season we had to create a new leader because the original one was destroyed by borers. We have yet to see cones on the tree. We live in the Northeast U.S. about 40 miles north of NYC.
Is pruning for height and width a good practice for this tree? If so, how and when.

many thanks for your help.
Carol

Hi Carol, 'Skylands' is officially a fast-growing tree, meaning it wants to grow 12 inches or more per year for a very long time. Personally, I never prune spruce. We only get 1 push of growth each year and it's easy to mess it up. Sadly, you appear to have selected the wrong plant for the right space.

See that plant in the gallery above from Iseli nursery. I've visited that particular tree many times. It's easily 50 feet tall and has been in the ground for only 25 years. It's not slowing down anytime soon.

yes! Picea orientalis 'Firefly' grows at about half the rate of 'Skylands'.

I planted Skylands in my own garden 10 years ago. It was probably 3 or 4 feet high then. It is now 13 feet high but much wider than 5 ft. at the base, the skirt is about 8 feet wide. It is in part shade, receiving sun only from 10 AM to 2 PM and again in the late afternoon at the top only. I have a client who claims this is her favorite tree and we are planting three now. I have seen Skylands here in NC 12 feet wide. Does climate have to do with the expanded width? We are in Zone 6/7 depending on our kind of winter in Asheville area. As a designer my problem is how do I space the trees at planting so they don't end up being removed because they were planted too close.

that would depend on the timeline of your installation. Trees are anything but static. They grow at a predictable and constant rate for decades, if not centuries.

We, (previously Cedar Lodge Nurseries) purchased 'Skylands' seed from the ACS in 1997. Seed source Ref. 059, collected by Paul Halladin of Iseli Nursery. From that seed we selected a much slower growing form of 'Skylands'. We have given it a cultivar name of 'Mini Sky'. That seedling sown in 1997 is now 1.6 meters high (5ft 4inches) — very attractive with compact form. Bare in mind we are in New Zealand with a faster growth rate than most other places. I will try and send a photo.

The part about the Skylands seedlings is a great addition to the record!

Can you help identify a problem with my 4-year old 'Skylands' spruce? Needles all over are turning brown. Research suggested cankers, mites, rust, or needle cast but further help with diagnostics has been elusive. Are there photos of these disease processes available somewhere? The tree appeared healthy until recently (September zone 7) Thank you in advance.

Hello Aileen ... 'Skylands' is notorious and infamous for sun scorch, burning badly until they are about 10 years old or so. It's 99% likely that's what's going on.

Hoping that is it. It is planted in full sun. But in general the tree does not look healthy. The cones at the top are brown. I have another one in the front of the house that looks okay. Very sad finding it looking this way as we are finally getting some relief from the heat.

Thanks for your response David.

I enjoyed reading all the comments and answers above. Here's my follow up question, which is related to some of the previous posts. How bad of an idea is it to move my Skylands if it has been in the ground for 2yrs? It is about 4ft tall and healthy. A couple years ago when I started planting stuff I think I focused too much on the 10 year height. For most of my trees it will be fine but this one gets pretty huge fast for the location I put it in.

I have a picea orientalis 'Skylands' since more then 15 years and have never seen any problem with it. It stands a little in half shade. Its now about 1 1/2 meter. I live in Sweden Dals Rostock.

Bertil ,
I have Skylands growing in Pennsylvania. It gets morning and midday sun and then afternoon shade. It does very well in those conditions. At an early age it grew slowly, but after about 7 years it seemed to be growing a little faster. It is about 20 years old and aprox 18 ft high, and about 6 ft wide.

We planted a Skylands ~15 years ago; it is now 18-20 feet and gorgeous. Due to a neighbor clear-cutting his acreage, it's been in full sun only one year. Just this spring we've noticed hundreds of small green and gold branchlets with 4 and 5 even smaller branchlets attached, dropping off the tree. No four-footed friends are involved. NW Wash, Any ideas? Thank you.

I purchased a Skylands Oriental Spruce 40” H x 20” wide .How little can I keep it in a large garden pot and trim it to control the growth?

This tree wants to be BIG. It grows very quickly. It is not a good candidate for container culture. You can always try...but note that pruning spruces is more difficult than pruning some other genera.