Tsuga mertensiana subsp. mertensiana var. jeffreyi was first described by (A. Henry) Camillo Karl Schneider (1876-1951), an Austrian botanist and landscape architect. The epithet honors Scottish plant-hunter and botanist John Jeffrey (1826-1854), who was active on the west coast of the United States, particularly in Washington, Oregon, and California. The accepted common name is Jeffrey's Mountain hemlock. Due to a lack of consensus on subspecies and variety status within Tsuga mertensiana, several synonyms exist, including: Tsuga pattoniana var. jeffreyi A. Henry, x Hesperotsuga jeffreyi (A. Henry) C. N. Page, and Tsuga x jeffreyi (A. Henry) A. Henry. Once thought to be a hybrid with Western Hemlock, there is a lack of verified evidence for this. Even where both species occupy the same site and morphologically intermediate individuals exist, a mere three specimens, all from Corral Pass near Mount Rainier, were considered of possible hybrid origin based on leaf pigment chemistry. Indeed, the limited overlap in the timing of pollen release and the failure of all known controlled pollinations to produce filled seeds support the conclusion that true hybrids between T. mertensiana and T. heterophylla are much rarer than the morphological intermediates on which hybrid status is based, if such hybrids occur at all.

Description. The dense branching, seed cones, and scales are the same as in var. mertensiana. The leaves are mostly two-ranked, with a greenish upper surface, a few lines of stomates on the upper surface near the tips, and a paler underside with greenish-white stomatal bands (rather than waxy bluish green on both surfaces).

Distribution. This subspecies is native to Canada — British Columbia (Vancouver Island) and USA — northern Washington State. Populations in British Columbia grow at altitudes ranging from 3,000 to 5,900 feet (900 - 1,800 m) and in Washington from 4,200 to 5,600 feet (1,300 - 1,700 m). The preference is for moist, cool growing sites with northerly exposures, frequently in concert with Abies amabilis and deciduous ericaceous shrubs.

Attribution from: Chris Earle; The Gymnosperm Database; ©2013. and Wikipedia, the Free Encyclopedia; ©2014 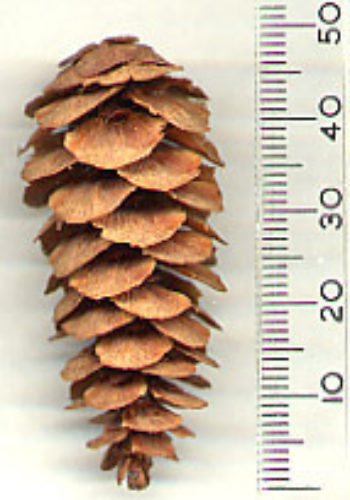