Tsuga canadensis 'Sargentii' is a large, shrub-form of Canadian hemlock with spreading, layered branching and pendant branch tips. Plants will not develop a central leader, rather branches will radiate from multiple trunks. After 10 years, a mature specimen will measure 10 feet (3 m) tall with a 20-foot (6 m) spread, an annual growth rate of 12 inches (30 cm) or more.

This cultivar originated as one of four seedlings collected in the 1850s, in the wild by General Joseph Howland of Matteawan, New York, USA. These all bore the collective, provisional name of "Sargent hemlocks." General Howland kept plant #1. Howland later gifted plant #2 to Henry Sargent of Fishkill-on-Hudson, Beacon, New York. Howard gave plant #3 to H.H. Hunnewell of the Hunnewell Estate at Wellesley, Massachusetts. It is not known if this plant is still alive. Plant #4 was given to Professor Charles S. Sargent, who was director of Arnold Arboretum, Boston, Massachusetts. This plant is still thriving at Arnold Arboretum.

Peter Del Tredici, in A Giant Among the Dwarfs: The Mystery of Sargent's Weeping Hemlock, argued that if all four of the plants were distinguishable, they should have unique cultivar names. He proposed:

Many taxonomists argue that the name 'Sargentii' should not be used but it persists in the trade and likely will.

Chub Harper: "This is large growing weeping form of hemlock that gains very large stature over time with a large spreading flat top appearance when viewed from a distance." 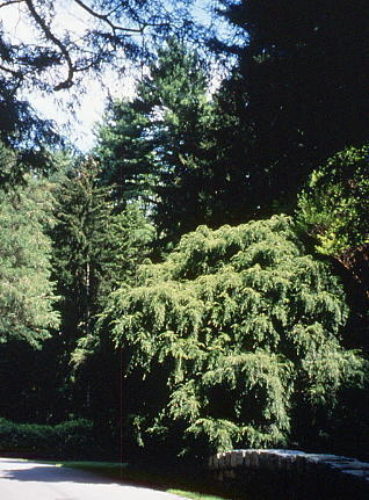 Tsuga canadensis'Sargentii' This specimen softens the walls at the Biltmore Estate in Asheville, North Carolina.
Photo by Charlene Harris

Try as I might, I have been unable to find any source to purchase Tsuga canadensis sargentii Any info would be appreciated

that's not really a surprise. Many of these classic cultivars from decades past have fallen out of favor with the growers. That's why so many of us have learned to propagate our own stuff.

If you are a producer, Decker Nursery in Ohio sells liners.

I am located in Arkansas, and have been searching for a weeping Canadian hemlock for months, any suggestions?

Nurseries throughout NC seem to have plenty varieties avaiable. I’m picking up a variety of Sargent’s today at Chattooga Nursurey in Cashiers, NC.

I finally found one at singtree.com Sing Tree Nurseries in California