This is one of the earliest collectable conifers not just because of its graceful rounded weeping form with a few long pendulous branches but because hemlocks were the central focus of American collectors in the northeast and Tsuga, which was abundant in the local forest, lent itself to many variants. Thus, weeping hemlocks became a prized focal point in 19th century estate gardens.

Of the four original weeping hemlocks (Tsuga canadensis f. pendula) taken out of the forest near Beacon, NY, ca. 1860 by General Joseph Howland, one of them made its way to the Brookline, MA, estate of Charles S. Sargent, the first director of Harvard's Arnold Arboretum. This is the parent of the Tsuga canadensis cultivar known as 'Brookline.' In 1980 Arnold's Dr. Peter Del Tredici measured it as being 7 1/2 ' tall and 32 1/2 ' wide.

This is not the same as Tsuga canadensis 'Sargentii,' however, which is actually named after Henry W. Sargent, cousin of Charles S., of Beacon, NY, who received one of the four original plants and introduced it to horticulture in 1875. The original 'Sargentii' (H.W.'s) died in the 19th century, as did the other of the four given to H.H. Hunnewell of Wellesley, MA. But 'Brookline' survived well into the 20th century as did Howland's specimen, which carried on the name 'Sargentii.'

Nearly all weeping hemlocks have been called Sargent's Weeping Hemlock or, synonymously, Tsuga canadensis 'Pendula' although their precise relationship to the original "founding four" weeping hemlocks is difficult to determine since their distinguishing characteristics are slight. Some growers have trained some low-growing Pendula specimens to achieve a height of several feet before letting them cascade down or have grafted them to a standard to achieve the same effect in a shorter time. 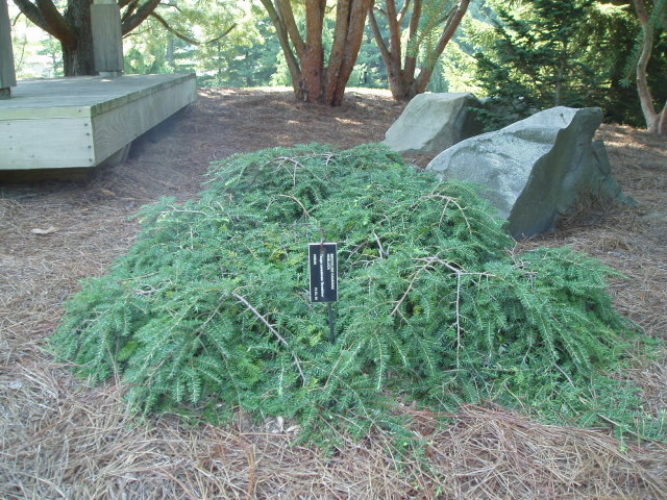