Thuja sutchuenensis was first described in 1899 by the French botanist Adrien René Franchet (1834-1900) based on specimens collected in 1892 in Chengkou County (Chongqing Municipality, formerly part of Sichuan Province) by the French missionary and botanist Paul Guillaume Farges (1844-1912). Its common names are Sichuan arborvitae in English and 崖柏 (ya bai) in Chinese. The epithet is a latinization of the Sutchuen (French for Sichuan). A synonym is Thuja sutchuensis, which is simply a misspelling. Despite repeated searches, this speces had not been seen by botanists in nature since 1900 and was presumed extinct until its rediscovery in 1999. The local Chinese population, of course, was making use of the species all along for its durability in applications such as shingles and coffins. All large trees of easy access have been exploited, leaving only shrubby specimens and some trees on slopes too steep and hazardous to reach.

Description. Sichuan arborvitae is an evergreen species of shrub or tree growing to heights 30 to 65 feet (10 - 20 m) tall with a trunk up to 1 foot (0.3 m) in diameter at breast height. Bark color ranges from bright reddish brown to grayish brown, furrowed, fibrous, and peeling in short, curly flakes. The crown is narrowly conical, with upwardly angled to horizontal branches bearing horizontal to slightly drooping branchlets. The branchlets are flattened and pinnately arranged. The shiny, bright green, scale-like leaves are 0.06 to 0.16 inches (1.5 - 4 mm) long, with greenish white stomatal bands beneath. Leaves of the main branchlets have blunt, spreading, or tight tips. Yellowish brown pollen cones are 0.08 to 0.12 inches (2 - 3 mm) long. The ovoid-elliptic seed cones are 0.2 to 0.3 inches (5 - 8 mm) long. This species is distinguished from others in the genus by its tinier leaves and cones.

Distribution. This species is restricted to a single population on the southern side of the Daba Shan near Chengkou, Chongquing, where Farges originally discovered it. This area has now been designated a Special Protection Area in order to protect the species. It inhabits moist ridges and slopes, frequently in limestone-based soils, at elevations ranging from 2,600 to 6,900 feet (800 - 2,100 m) above sea level. In this setting, it mingles with mixed deciduous and evergreen broadleaf species. Winter hardiness estimates are in the Zones 6 to 7 range.

Attribution from: James E. Eckenwalder; Conifers of the World, The Complete Reference; ©2009 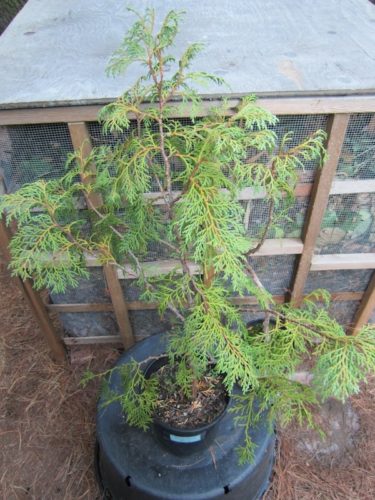 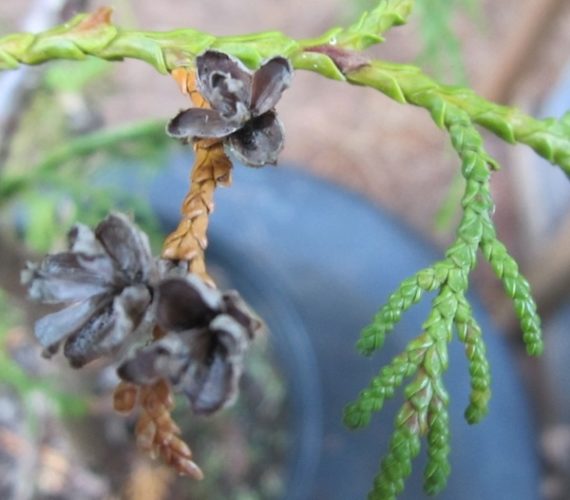 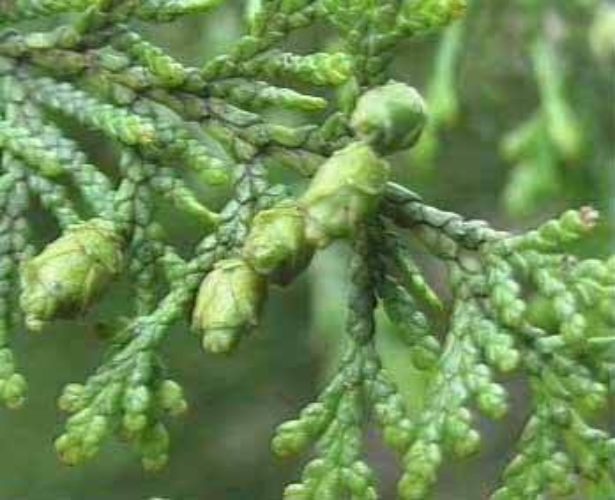 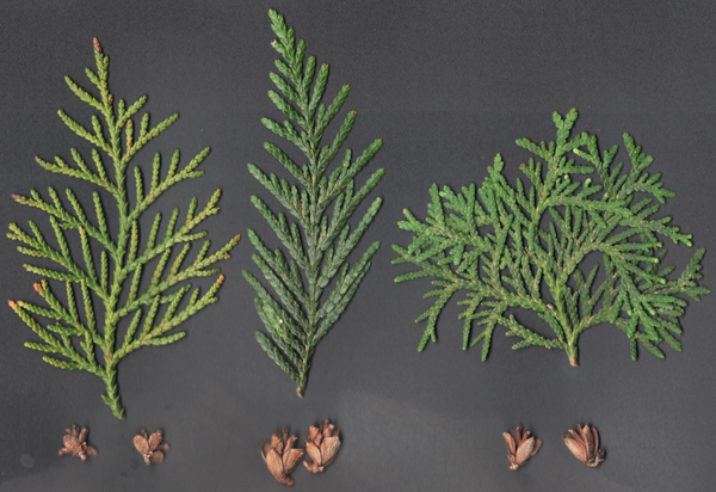 Contribute your photos to Thuja sutchuenensis