Thuja standishii, first described in 1867 by French botanist, Élie-Abel Carrière (1818-1896), is commonly known in English as Japanese arborvitae. In Japan it is called クロベ (nezuko, kurobe). It is considered one of the "Five Sacred Trees of Kiso", the other members being Chamecyparis obtusa (hinoki), Chamaecyparis pisifera (sawara), Thujopsis dolobrata (asuhi, asunaro), and Sciadopitys verticillata (koya maki). Shinto shrines are generally built from unfinished wood of the five trees. These five were the most valuable trees of the great Kiso Forest and during feudal times were protected from cutting by the common people. They were cut only for the residences and temples of the wealthy and powerful. Commoners who were caught poaching were punished with death! In modern times, Thuja standishii is an important timber tree in Japan, grown in forestry plantations for its durable, waterproof, pleasantly-scented wood. The light, soft wood is also used for bent wood ware, kegs, and tubs.

The epithet honors John Standish (1814 - 1875), proprietor of Sunningdale Nursery of Ascot, United Kingdom, to whom Robert Fortune first sent seed in 1860 that he collected from Tokyo gardens, along with many other exotic species from Japan and China.

Description. Japanese arborvitae is an evergreen coniferous species of tree that grows to mature heights of 65 to 100 feet (20 - 30 m) high, with an trunk diameter of 18 inches (50 cm), measured at breast height . The crown is pyramidal, with ascending or spreading branches and drooping foliage.

Distribution. This species is native to southern Japan, specifically mountainous areas of the islands of Honshu and Shikoku. It grows primarily in subalpine and moist, cool temperate forests at elevations of 1,650 to 8,200 feet (500 - 2,500 m) above sea level in the company of such other conifers as Abies homolepis, Taxus cuspidata, Tsuga diversifolia, and Pinus parviflora. 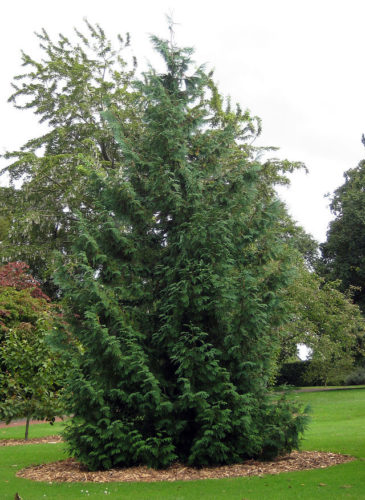 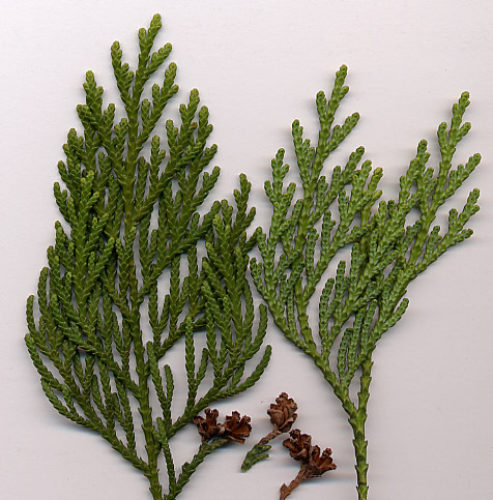 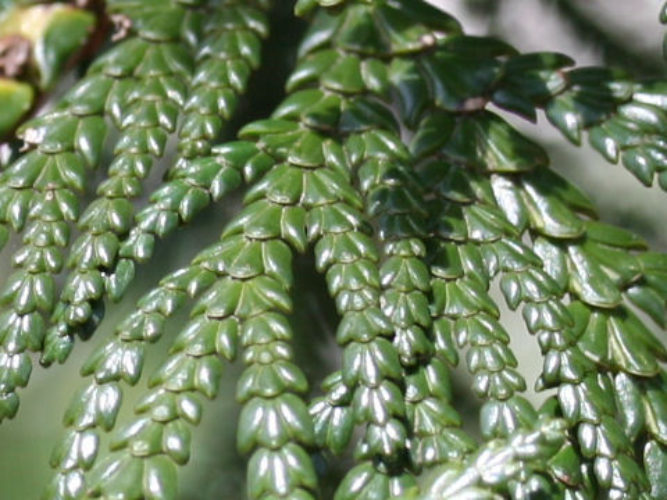 Contribute your photos to Thuja standishii