Thuja plicata 'Whipcord' is a shrubby, slow-growing, dwarf form of western red-cedar that grows with pendulous whipcord-like green foliage which droops from branchlets rising upward, fountain-like, from the center before arching downward.

This small shrub typically grows as a flattened mound when young, growing to 2 feet (60 cm) tall and to 3 feet (90 cm) wide over its first 10 years in the landscape. Eventually it will form a more rounded shrub up to 4 to 5 feet (1.3 - 1.6 m) tall and as wide. Its glossy green foliage usually acquires bronze tones in winter in colder climates.

It is best grown in moist, fertile, well-drained soils in full sun to part shade, thriving in cool summer climates. 'Whipcord' is generally intolerant of dry conditions. Although it performs best in full sun, plants generally appreciate some light afternoon shade in hot summer climates that have different warm season temperatures and soil conditions than the specie's native habitat of the Pacific-northwest of the United States.

This cultivar originated as a seedling found in 1986 by Barbara Hupp of Drakes Crossing Nurseries, Silverton, Oregon, an understock supplier to Iseli Nurseries of Boring, Oregon. After years of testing, Iseli introduced the cultivar to the trade in 1999. Since its introduction, tens of thousands of Whipcord cultivars have made their way into North American gardens in no small measure because of its unusual growth habit. Many people don't think they are purchasing a conifer but an ornamental grass! 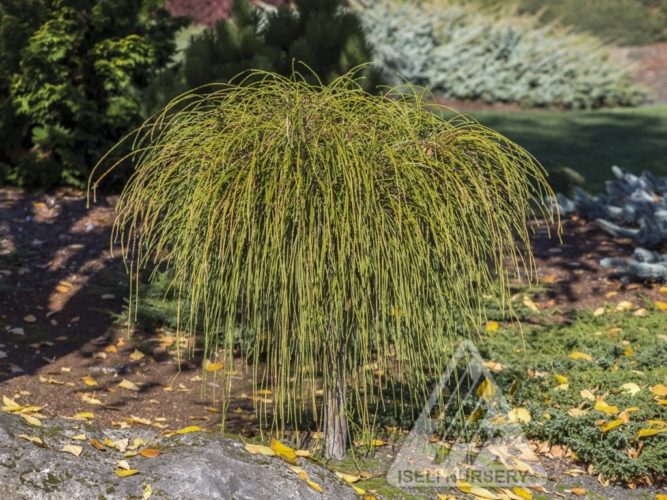 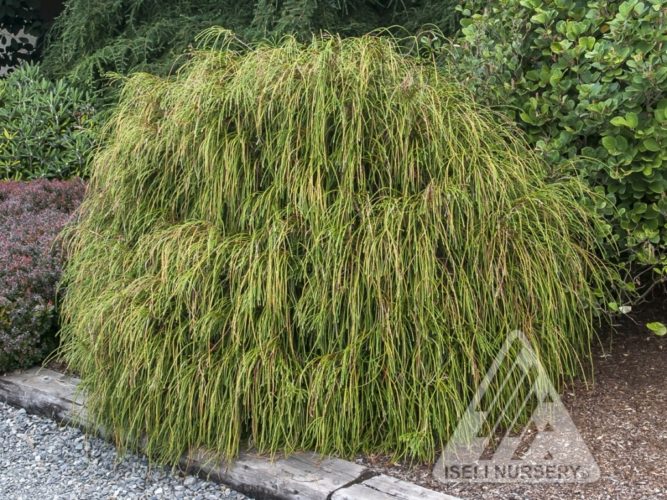 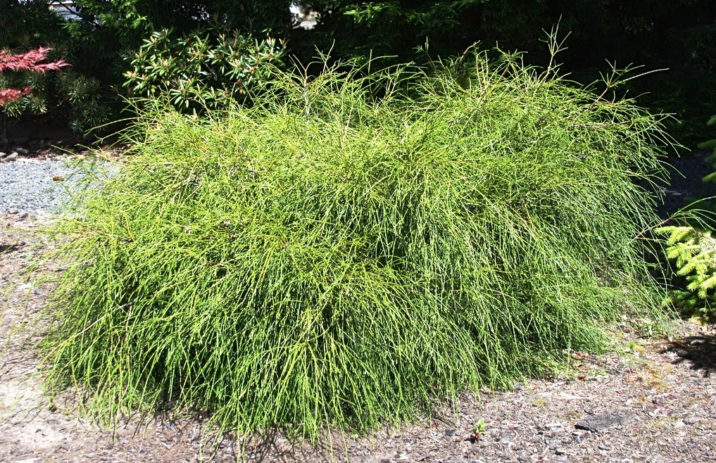 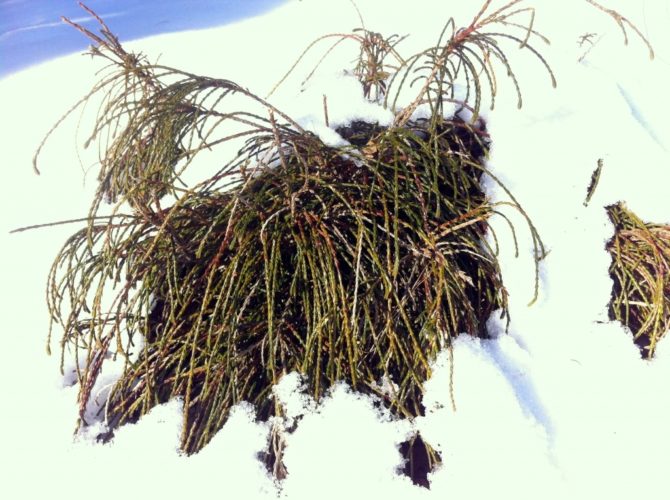 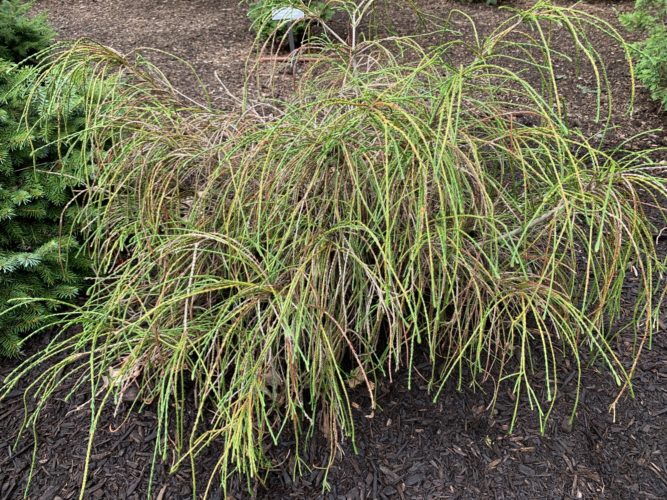 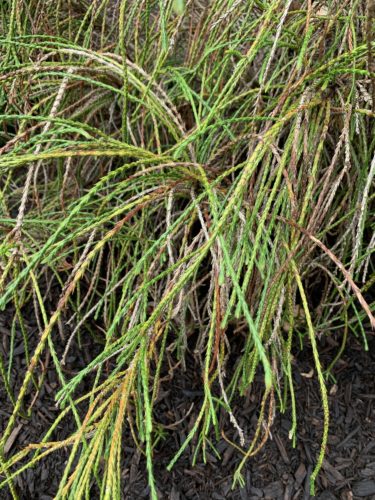 Mine is much, much darker (I have several). I’d call it dark green, not the bright green of this photograph, which resembles the coloration of Platycladus ‘Franky Boy’ more than T. p. ‘Whipcord’. What do you think? Are mine unusual or is the photo color a bit off? I do love this plant.

I have always thought of ‘Whipcord’ being a yellowish-green and even almost a brownish-green (in winter). I am curious about your dark green color. I wonder if your drier climate might play a role in the color differences? Here in our northwest corner of Oregon, ‘Franky Boy’, appears more a bright lemon-lime to my eyes (lemon on the outside, lime on the inside).

Just saw this - yes, my 'Whipcord' is definitely brownish-green in winter, but the rest of the year it is darker than the photo above. I'll try to find a photo and post. And 'Franky' is pretty limey!

I just planted one of these mop tops in Massachusetts. I did not know that it also comes available on a "standard" as is pictured in Special Conifers fo Small Gardens ...Vol. 1(R. Fincham)....pp.202

Hey Joseph - nice to meet you at the national meeting last week!

Can I grow this bush from of piece of my bush?

Patricia, I'm not sure I understand your question ...

I think she is asking if she can propagate it from a piece of her existing plant.

Hope Thuja can over winter in cement containers in zone 6-7 Hollytone too strong to use in fall?

Arborvitae is an amazingly hardy plant, rated to zone 3. No problem overwintering at all for you.

Never fertilize conifers in the fall! They need to get ready to sleep.

Make sure that it doesn't dry out. Containers freeze/desiccate much faster than the ground does.

My whipcord I transplanted in the spring to a different location in the garde and it is has turned all brown. I live SW Ontario so it is fall. Can I cut it back and if so when ?

Tina , I think your "cord might be cashed .I would wait till next year to be sure.
I picked one up yesterday , half price Columbus Day sale

I planted my dwarf whipcord last spring and it did really well, I noticed this year it is completely brown. Is there something that I can do to bring this back to life and green again?

In colder parts of the planet, this and many other arbs will assume a bronze cast in winter that returns to green with the onset of warm weather.

Thanks! We are in Ohio and we did not have hard winter. I’ll just hope that it comes back.

Just bought a whipcord this morning--I fell in love--to put in a large pot. I didn't realize it is a conifer: I am allergic to juniper and tend to avoid evergreen types--should I buy more antihistamines? Thank you.

beyond that, I don't think your question can be answered.

I have 2 Whipcord trees that have been planted near each other for 1 year now. One of them is mostly green but the other one has an area that is mostly brown cords. Should I cut the brown cords off or will they eventually grow new green? Both trees have new growth. Both have had the exact same weather & watering.

if there's green at the end of the brown cords, then it's part of the normal process of growing woody stems. If the entire cord is brown, it's dead and appropriate for you to remove it.

Does anybody know if this plant can handle living in Austin, TX, zone 8b?

this species has evolved to thrive in a modified Mediterranean climate. It'll do fine in central Texas if humidity is fairly low and Summer night time temperatures drop into the 50s or 60s at night. It'll also need quite a bit of supplemental water.

I have a whipcord that is doing well but I planted it in a too tight place. What time of year can I transplant it?

Hi Glenda. Since you didn't mention where you live, it's hard to be certain. For me in western Washington state, the second week of October is the best to to plant and transplant conifers. We need daytime temps in the 60s and night time temps in the 30s or 40s.

Can I grow my whipchord in a pot?

sure ... Just make sure you use a potting medium that's appropriate for woody plants.

What is the right potting soil and I plant in the ground will it be ok in my clay soil? Such a beautiful plant

a good potting soil for conifers is 50% fine bark, 35% pumice and 15% compost. Good drainage is key.

Given that this species has evolved to thrive in well-drained, temperate rain forests, moisture-retentive soil should present no problems.

I live in the western suburbs of Chicago. I’ve been searching for a whipcord tree and can’t locate one anywhere. I had one at my last house and it thrived well .does anyone know where I can get one?

Hi Mike ... 'Whipcord' is an extremely easy plant to find in the nursery trade. Any garden center worth shopping at should carry it. If they don't have any in stock at the moment, just ask them to order one in for you. This is a staple of Iseli nursery's offerings. If your favorite garden center sells Iseli products, they can bring one in for you.

Mike T,
Lurvey’s Nursery in Desplaines has them as of yesterday, several actually!

We bought three of these and they started to turn brown like they were dying...I put fertilizer on them..and no change...then I sprayed it for pests and no change...I think they are dead...they were planted in an already existing garden area....so I don't know what happened!

Hi Dawn, you didn't say where your were trying to grow them. Oft-times spring is a horrible time to plant conifers. They need a season or two to establish a root system before the heat of summer kicks in.

Also, never fertilize the landscape unless a soil test indicates a deficiency.

This species evolved to thrive in the Modified Mediterranean Climate of the Pacific Northwest. It likes low humidity and cool nights.

how low are your temperatures? This one's cold-hardy to at least -5°F. If you get colder than that, you may have issues.

I’m in upstate ny and I planned 2 this past summer and On one a bunch of cords are all dried out and brown (dead?) should I cut those off at the base? I got a evergreen fertilizer spike for them, not sure if they helped or hurt???

yes ... dead material should always be removed out of a sense of tidiness. Depending on the beginning fertility of your soil (always test before adding chemicals), it's most likely that a fertilizer spike did absolutely nothing.

I have one growing here [USDA Zone 6a] in a pot, first winter a few branches died but quickly came back. I plan on training it to cascade high up and over the pot, should get a lot of notice with the neighbors.

I love my whipcords! They are doing ok, but some stems are black now. Is this from a bug? I read it can be from a bug/droppings causing fungus. How do I help it?