Pseudotsuga menziesii var. glauca 'Glauca Pendula' is an large-growing, blue-green selection of Douglas-fir with weeping laterals and an upright central leader that does not need to be staked. In central Indiana's severe winter of 2014, this plant showed absolutely no stress, suggesting that it is easily hardy to zone 5. It incurred no damage despite exposure to excessive winter wind and a southern exposure which caused snow-reflected sunburn for many other conifers. It actually performed better this past winter than many other conifers with a zone 6 hardiness rating. (comments courtesy of ACS member, Terri Park). Typical rate of growth in most areas is 12 to 15 inches (ca. 35 cm) a year, producing a worthy garden centerpiece 10 feet (3.5 m) tall and 3 feet (1 m) wide after 10 years in the landscape.

The origin of this cultivar presumably dates from 1891, from a seedling selected by Simon-Louis Frères Nursery near Metz, France. It was grown from U.S. sourced seed. 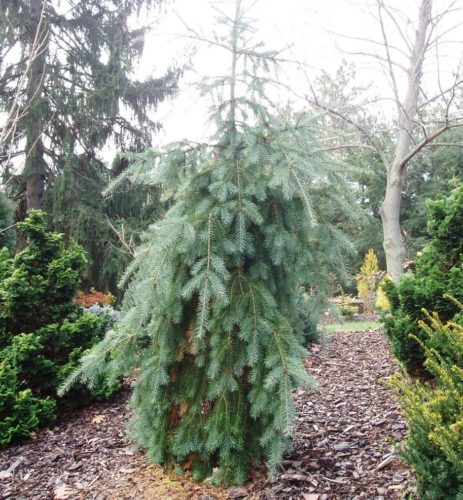 Webmaster, please notify when you have reviewed my photo and comments.

Hi Jay. Your comments and picture have been incorporated. Thanks for you help in "completing the record" with this cultivar. I appreciate your efforts on behalf of the ACS.

Hi David, It is me (Terri) that is the Photo nut with thousands and just enough techno skill to find and upload them. Jay likes to read comments on the Forum, but everyone moved to Facebook, so we had to figure out how to do that with help from our younger staff. When we were up at Gee's in May, Gary Gee said he could manage Facebook, so that gave Jay hope. However, he doesn't type, so he mostly just reads. I might make it a winter project to go through some of my photos to see what I have and then see if photos are posted or not. I know Dennis Groh has tens of thousands of photos so maybe he's already a strong contributor. When I need to look up an unknown conifer, I go to Google chrome and they have lots of images, but then they thread into other varieties and even genus on the same batch of photos, so that is confusing. Not to mention that the ACS should BE the SOURCE of all information CONIFER!!!!

Hi Terri, sorry for the misunderstanding. I had a 50% chance to get it right. LOL. Dennis Groh does, in fact, does a lot of contributing to the cause here. What he's been great at is helping to unravel some of the historical mysteries that are out there. Your enthusiasm toward our project is hugely appreciated. Thanks again!

Hi David, I have a correction of my own comments to make: It's been in the ground 14 years from a 2 year graft and is now approximately 15' ht x 4.5' width. So, that would push it into the Large category. Once they settle in, the growth accelerates. Also, we are in Indiana just in the county North of Indianapolis.

On another note, I have never agreed with the new USDA re-zoning from Z5 to Z6 in our area and the past winter confirmed that instinct. But that never prevents a true coniferite from pushing the zones a bit. So, now the question is, have they changed the Zone designation on the CONIFERS or not in various supplier catalogs? That, at least should be consistent, because even though I don't agree doesn't mean the Government will change the maps back to the colder weather we've had prior to 30? years ago. I don't know if they just ignored the winter of 1995 when it was minus 37 here in Carmel, IN or if it was averaged in and warmer winters balanced it out. Seems to me it would be more appropriate to have a Range of actual Temperatures rather than and Average, because that's more what the plants are responding to as well as the drop in temperature. But what do I know, I'm just observing the facts of the plant damage and which barely survived (or didn't) and which thrived?

I'll get the hang of this before long. I have lots of photos I can post.