Pseudotsuga lindleyana, first described by (Roezl) Carrière in 1868, is commonly known as the Mexican Douglas-fir or as guayamé, hayarín or pinabete in the Spanish language. Many similarities exist between this species and Ps. mensziesii var. glauca and although many argue that Ps. lindleyana should be relegated to being a third variety of of Ps. mensziesii, it has never been described as such and therefore will remain a separate species for now.

Description. Mexican Douglas-fir is an evergreen coniferous tree growing to heights of 80 to 120 feet (25 - 40 m) with trunks to 24 to 50 inches (60 - 125 cm) in diameter, and bark not very thick as compared to Ps. menziesii subsp. menziesii; it is smooth-grey on young trees, becoming shallowly fissured, purplish-grey with yellowish-buff fissures. The tree's crown is open, thin and sparse, with branches growing level with slightly drooping branchlets. Leaves grey-green to drab mid-green growing en masse (note that they are not glaucous Blue), commonly pointing forward along the shoot and curving slightly outward at the tips (particularly on vigorous shoots, more spreading on shaded shoots). The needles are short, 0.4 to 1.2 inches (1 - 3 cm) long and 0.04 to 0.05 inch (1 - 1.2 mm) wide, with two adaxial greyish stomatal bands prominently facing outward from the shoot, abaxial side facing shoot mid-green without or only with a few stomata (unlike the dense abaxial stomatal wax of at least southern populations of Ps. menziesii subsp.glauca). They are not strongly scented when bruised. Seed cones are purple (with green bracts) ripening buff-brown, small, 0.8 to 2.8 inches (2 -7 cm) long, ovoid to ovoid-cylindric. Scales, not opening widely, are around 1 inch (2 -2.5 cm) broad, with bracts exserted 1-2 cm, moderately straight to spreading or twisted, rarely strongly reflexed (as more frequently seen in Ps. menziesii subsp. glauca).

Distribution. This species is native to Mexico — Sierra Madre Occidental, Sierra Madre Oriental, and rare in the Sierra Madre del Sur, and south to Oaxaca, where two small populations were recently discovered on Peña Prieta in the San Felipe Mountains just north of Oaxaca City, and on Cerro Quiexobra 68 miles (110 km) southeast of Oaxaca City, this at 16°22'N, is the southernmost locality for the whole genus (Debreczy and Rácz 1995). The type locality is near Pachuca, Hidalgo (Little 1952), about 50 miles (80 km) northeast of Mexico City.

In the USA — possibly in extreme southeastern Arizona, southwestern New Mexico and western Texas (Chisos Mountains), but these populations are more probably Ps. menziesii var. glauca.
Typical habitat is on north-facing slopes or high valleys, at 7,400 to 10,500 feet (2,300 - 3,300 m) of elevation, in moist conifer or mixed forests with high summer rainfall and dry winters. 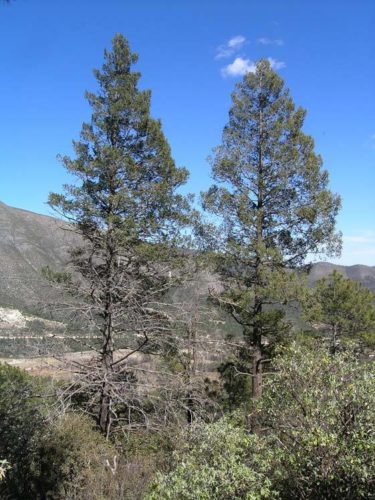 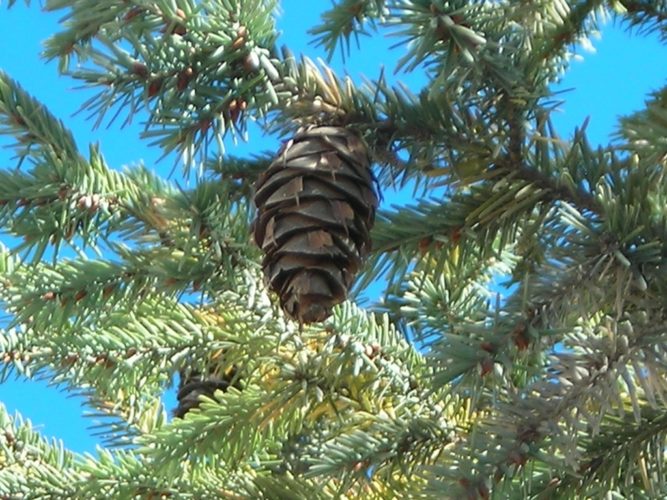 Contribute your photos to Pseudotsuga lindleyana

I live in Houston and would love to obtain one or more of the Asian species or Pseudotsuga lindeyana. I plan to raise in a container. Pseudotsuga macrocarpa would work as well. I have been unable to fins anything other than P. mensziesii, which dies in the Houston's incredible humdity. Help!?

Pseudotsuga macrocarpa is native to the dry mountains of Southern California. If P. menziesii does not tolerate your humidity, P. macrocarpa certainly will not. Maybe there is another Asian specie that would fair better?