Pinus thunbergii 'Thunderhead' is an attractive, vigorous, broadly pyramidal selection of Japanese black pine with densely packed, long, brooding, dark-green needles and distinctive silver-white candles that are most attractive in late winter/early spring. After 10 years of growth, a mature specimen will measure 12 to 15 feet (4 - 5 m) tall and 20 feet (6 m) wide, an annual growth rate of 12 to 15 inches (30 - 37 cm). Like all cultivars in this species, specimens can be easily aesthetically pruned to control a plant's size and form.

As is true with most Pinus thunbergii, 'Thunderhead' is hardy to USDA Zone 5 although the needles could burn at temperatures of -10 to -15ºF (-23 to -26ºC). Plants are especially vulnerable during times of wide and rapid temperature fluctuation. If possible, winter protection from the effects of wind chill could greatly increase your odds of successfully maintaining this plant in your garden.

This cultivar originated as a seedling selected around 1987 by Angelica Nurseries, Massachusetts, USA. It was originally released under the provisional name, [Angelica's Thunderhead] and at some point the cultivar name became shortened into its present form. 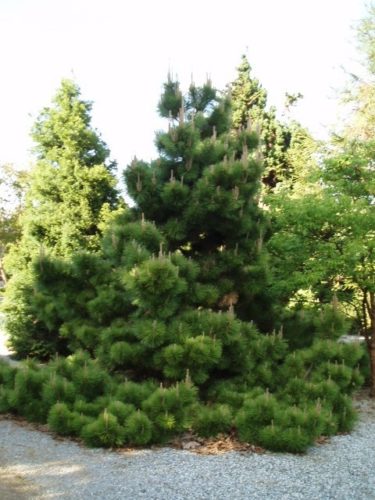 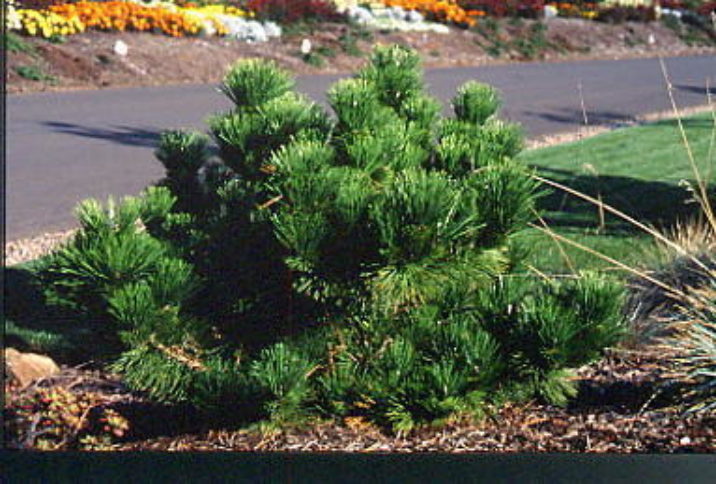 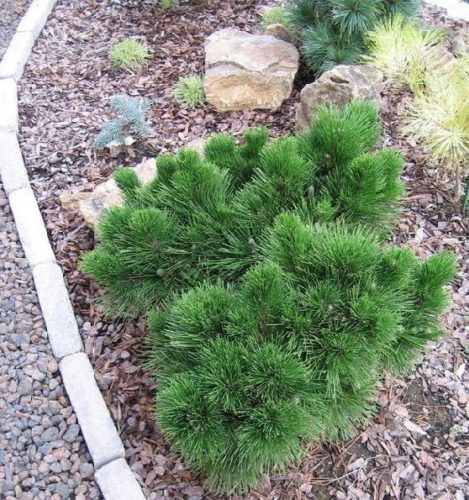 In only it's 2nd year in the ground mine pushed out a 15" leading candle! We may need to revise it's dwarf status.

Hey Eric . . .
indeed 'Thunderhead' can be a beast, albeit a beast that is easily controlled through aesthetic pruning. I've revised the macro-record to correct its fictitious dwarf status. I'll tighten up the rest of the record tomorrow.

I probably should have prefaced my earlier statement by mentioning that my 'Thunderhead' gets full south-facing sun, and plenty of supplemental water. I would bet that contributed quite a bit to it's significant 2nd year growth spurt. What will year three have in store for me I wonder? I imagine I will take your advice and start my aesthetic pruning early. Thanks CE!

Growing conditions aside, 'Thunderhead' over time, becomes one big bad pine. I debulk mine by about 2-thirds every year to keep it in line.

A thug. Everyone gets seduced by those incredible white candles in the dark foliage and then it gets in the ground, gets happy, and becomes a huge wooly bear. I have aesthetic pruners work on mine twice a year and they've taken off about 50 x more than is still on the two plants. You'd better have a lot of room...

I didn't leave enough room when I planted mine three years ago. Can I dig it out and move it this spring? I'm in Boston.

Hi Lisa. If you're interested in the plant's survival, it might be best to wait until September or October. That way it can grow roots before the stress of summer.

I'm in California. I will have to move mine as well. Is your advice about timing applicable here i.e. end of summer? We still have quite a bit of warm weather until end of October. Thanks for your advice!

You would want to wait until autumn. I am in zone 9b in Sonoma County and I do my transplanting (and planting) in November and December).

Thank you. I'll wait till then.

Can I keep mine small by pruning?
When do I prune it?
Thanks!

First round is in spring as candles are extending. Get rid of all of the strong candles and leave only a few of the tiniest buds at the ends of the shoots. Then when the needles have extended 3/16th of an inch from the fascicle, reduce the candle size to 2-3 whorls of needles.

Second round is in early summer. Hunt for back buds and shorten shoots to just above them. Also prune the whole plant for shape.

Third round is in fall, once everything is done growing for the year. Prune off everything you missed in rounds 1 and 2.

Keep in mind that this cultivar is an absolute beast and if you neglect it, it will explode with growth in a single season.

I'm debating where to put Thunderhead in our garden - a container or in the ground. In 8b Tacoma, WA. We have a bit sandy, rocky, well drained soil...it would probably be happy in the ground here. What size will it live with comfortably at maturity? I don't mind pruning it and thinking I'd like to style it a little. Guess I'm kind of nervous since reports vary so widely about it's eventual size. I don't want to be constantly fighting off something that wants to be 20' monster in the front yard.

Inga, I can offer this first-hand report based on observations and my own plant in USDA zone 8a, Olympia, WA ... 'Thunderhead' is a beast that will grow 2 feet or more per year if left to grow free range. Give it room, or be prepared to prune it heavily at least twice a year.

It definitely wants to be a 20-foot monster and it wants to get there fast.

Thanks for the reply, David. Container and lot of pruning it is, haha. :)

just be prepared to to root-prune or up-pot it every year.

I have a Japanese Thunderhead that I would like to move from an embankment to a raised planter. We had two and one did not make it. The one that is thriving was planted in fall. I’m worried if I move it now it may not make it through the summer. Any advice on how to minimize the risk of loss. Can I do so by creating the best growing conditions possible for my favorite little tree? Zone 7

I am thinking about buying and planting this beauty in zone 6b ( New Jersey). Is it deer resistant?

It seems that the zone classification is off for the Thunderhead Pine. We're in Zone 5 and it did well the first two years, then started browning and dying. It had good sun, proper fertilization, and we even put up snow-wind breaks.

We've seen other reports from people in Zone 5 who have also reported that cold weather does the pine in.

Nurseries in our area have reported the same thing. They were the rage a few years ago, but the lines kept dying after a couple of winters.

It's a beautiful tree; but the USDA and nurseries really need to reclassify this as Zone 6 and higher! If you're in a cold climate area, DON'T EVEN TRY THIS!

we've applied the hardiness zone of the species. Depending on seed provenance, individual seedlings may be a little hardier or more tender. Also be aware that USDA Zone 5 means different things for different people.

In evaluating how appropriate a conifer is for different parts of the world, it's important to look at climate. Obviously this conifer originates in Japan. Comparing Japan's climate with your own will give you the best idea of whether a Japanese plant will thrive in your area.

I have a Thunderhead pine that I planted 2 years ago. It's in a south-facing location with plenty of sun and heat. I wonder whether it would thrive in a NW location with much less light and heat and sheltered by some larger mature trees. I'm in the Pacific Northwest.

I have one planted on the north side of the house where it gets only about 3-4 hours of sun depending on season. It does fine. I'm in Washington state.

I just received this pine through a company online, it is already established to some degree but when I opened the box the plant has lost so many needles. Is this a case of blight or just shock from being in transport? Thank you

Plant this pine 3 years ago and love it. Just recently the upper branches have become weak and are sagging. It was doing great till about a week ago when I notice the first branch sagging, over the next couple days more branches are sagging. It gets full sun at least 9 hours and day. Any suggestions on what is happening?

needles are out-weighing the strength of the branch. No worries. Pines are very bendy.

I am also having this problem. Should I prune out the heaviest part of the branch? It’s looking more like a weeping pine as the branches have sagged so much right now.

it's your plant, Sally. You can do as you please. I'm convinced that there's no amount of pruning that will permanently harm this particular cultivar.

I have 15 year old Thunderhead in New Jersey, and there are lots of dead needles around it. Can I use the needles as mulch under other plants? Thanks.

yes! Absolutely. Pine straw makes a great mulch. I the southeast they bundle it and sell it.

how big did the tree get I am in jersey too.

I know to plant in Nov or Dec. however, without thinking, I thoughtlessly planted a Pinus thunbergii ‘Thunderhead’ mid-May in NC! It is on south side of house in full sun. It was planted in 22” deep hole w 30” diameter. We put 2 large bags of Permatil in the bottom of hole, and back filled with half and half mixture of permatil and cow manure compost. We’ve read this tree likes heat and dry feet, but how often and how much should we water as a new tree? Should we fertilize?

you didn't say how big your plant is.

water when it needs watering (when soil is dry 2 inches down). Never fertilize landscape plants unless a soil tests indicates a deficiency.

I don't plant woody plants in spring or summer ... ever!

My plant is mature at 12 years and I have a great deal of dead needles that don’t shed without grooming and the the bare branch is exposed. Is this normal and should I groom on a regular basis?

yes! You've encountered some of the well-known features of this plant — it grows like a weed and is a pine-mulch factory. Grooming, candling and pruning is a must, often 3 times a year.

How can you strengthen the root system? It is about 5ft tall and three years ago was staked to prevent it from tipping over.

I've seen tons of these and they all lean over. The top growth is simply too aggressive and always wants to outrun the roots. Prune the heck out it and the roots should eventually catch up.