Ethnobotany. This tree is known to the Native American Iroquois as the Tree of Peace. It is known as the Weymouth pine in the United Kingdom, after George Weymouth who brought it to England in 1620. Eastern white pine forests originally covered much of northeastern North America. Only one percent of the old-growth forests remain after the extensive logging operations that existed from the 18th century into the early 20th century.

During the age of sailing ships, tall white pines with high quality wood were known as mast pines. Marked by agents of the Crown in colonial times with the broad arrow, they were reserved for the British Royal Navy. The British built special barge-like vessels which could carry up to 50 pine trunks destined to be ship masts. The wood was often squared immediately after felling to fit in the holds of ships better. A giant 120 foot (37 m) mast was 4 feet (1.2 m) wide at the bottom and 30 inches (76 cm) at the top. The original masts on the USS Constitution (Old Ironsides) were single trees but later they were laminated to better withstand cannonballs.

Marking of large specimens by The Crown was very controversial in the colonies, and their de facto seizure was a point of great contention among the colonists and played a significant role in the events leading to the American Revolution. During the American Revolution it became a great sport for the patriots to see how many of the King’s trees one could cut down and haul off.

Description. Eastern white pine is an evergreen coniferous species of tree that easily lives to be 200 to 250 years old. Some white pines live over 400 years. It has the distinction of being the tallest tree in eastern North America. In natural pre-colonial stands it is reported to have grown to as tall as 230 feet (70 m). There is no means of accurately documenting the height of trees from these times, but eastern white pine may have reached this height on rare occasions.

Pinus strobus grows approximately 3 feet (1 m ) annually between the ages of 15 and 45 years, with slower height increments before and after that age range.

Because the eastern white pine tree is somewhat resistant to fire, mature survivors are able to re-seed burned areas. In pure stands, mature trees usually have no branches on the lower half of the trunk. The white pine weevil (Pissodes strobi) and white pine blister rust (Cronartium ribicola), an introduced fungus, can damage or kill these trees. However, possibly due to the hard work of forest managers mortality in white pines from rust is only about 3% today.

Distribution. This species is found naturally from Newfoundland west through the Great Lakes region to southeastern Manitoba and Minnesota, and south along the Mississippi Basin and Appalachian Mountains to northernmost Georgia and Mississippi. Found at sea level in the north part of its range, and up to 5,000 feet (1,500 m) in the south, where it prefers well-drained soils and a cool, humid climate. Forms mixed stands with Canadian hemlock (Tsuga canadensis), oaks (Quercus species), or American elm (Fraxinus americana). Pinus strobus now naturalizes in the Czech Republic's Carpathian Mountains and southern Poland due to specimens planted as ornamental trees in gardens and parks.

Eastern white pine is now widely grown in plantation forestry within its native area. Old growth pine in the Americas, of various Pinus species, was a highly desired wood since huge, knot-free boards were the rule rather than the exception. Pine was common and easy to cut, thus many colonial homes used pine for paneling, floors and furniture. Pine was also a favorite tree of loggers since pine logs can still be processed in a lumber mill a year or more after being cut down. In contrast, most hardwood trees such as cherry, maple, oak, and ash must be cut into 1” thick boards immediately after felling or large cracks will develop in the trunk which can render the wood worthless.

Pine tar is produced by slowly burning pine roots, branches, or small trunks in a partially smothered flame. Pine tar mixed with beer can be used to remove tapeworms and nematodes. Pine tar mixed with sulfur is useful to treat dandruff, and marketed in present day products. Pine tar can also be processed to make turpentine.

Pinus strobus is cultivated by plant nurseries as an ornamental tree, for planting in gardens and parks. The species is low-maintenance and rapid growing as a specimen tree. With regular shearing it can also be trained as a hedge. Some cultivars are used in bonsai. There are currently 131 Pinus strobus cultivars in the ACS Conifer Database.

Smaller specimens are popular as live Christmas trees. Eastern white pines are noted for holding their needles well, even long after being harvested. They also are well suited for people with allergies, as they give little to no aroma. A standard 6 foot (1.8 m) tall tree takes approximately 6 to 8 years to grow in ideal conditions.

Sheared specimens are usually sold because of their stereotypical Christmas Tree conical shape; naturally grown ones can become too thick for larger ornaments, or grow bushy in texture. The branches of the Eastern White Pine are also widely used in making holiday wreaths and garland because of their soft, feathery needles.

Eastern White Pine is the provincial tree of Ontario, Canada; and the state tree of Maine and Michigan. Its "pine cone and tassel" is the state flower of Maine whose nickname is "The Pine Tree State." 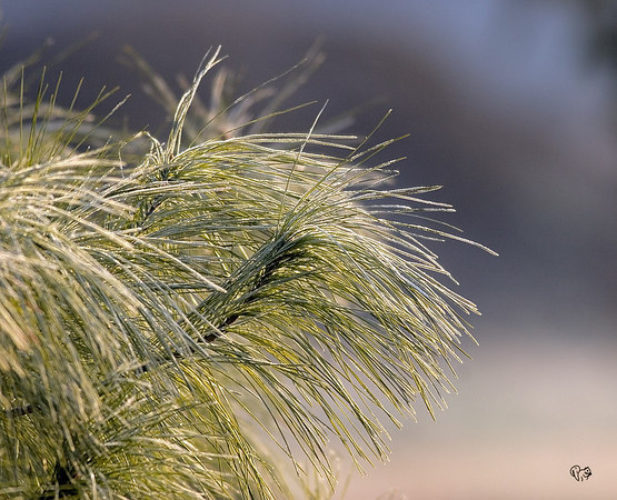 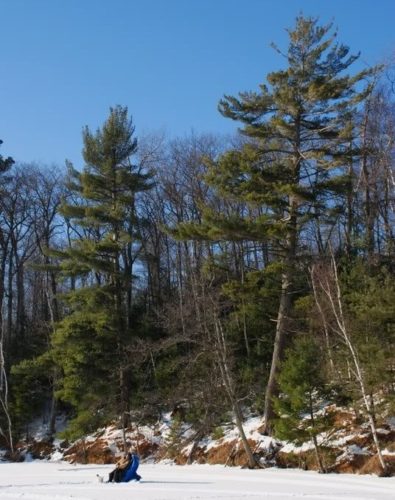 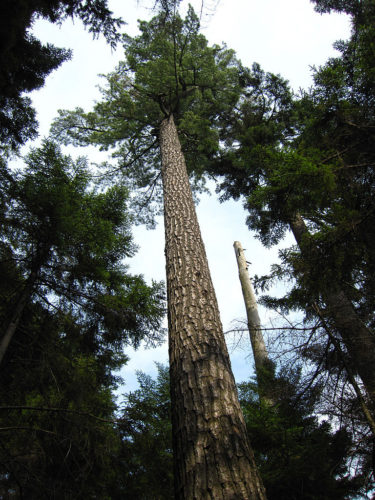 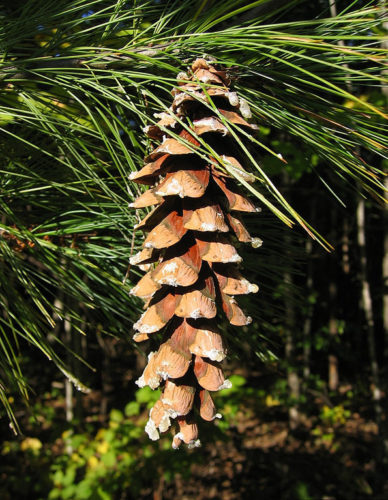 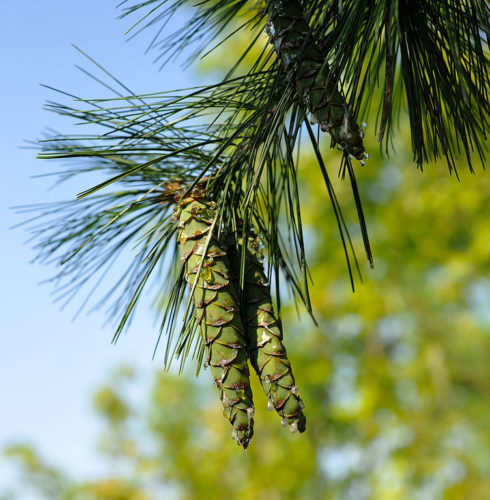 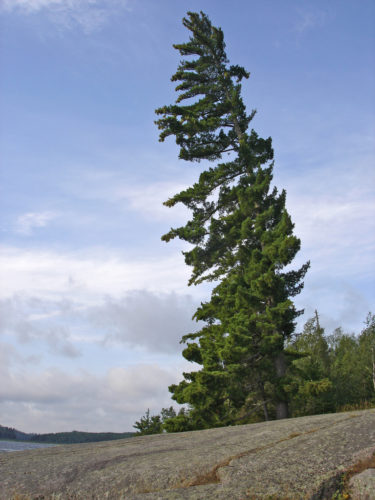 Contribute your photos to Pinus strobus

not prone to spruce beetles, but pines have their own bevy of bugs that like to eat them. Best to contact your local county extension to learn specifically who to look out for.
https://ucanr.edu/blogs/blogcore/postdetail.cfm?postnum=25851

Can white pine be sprayed with any type of insecticide?

I am having a difficult time distinguishing the three trees in my backyard between eastern white pine and western White Pine. I am located in Oregon. All the information I have found regarding eastern and western white pines does not go into detail regarding how to tell the two apart. Can anyone comment with some of the tell tale differences between eastern and western so I can discern which variety is in my backyard? Thanks.

Lowell, the two species are pretty similar. If you live in the mountains and the tree is growing there naturally, it's probably monticola. If it was planted at some point, it's probably strobus.

Scheffield's should be able to hook you up with that. The American Conifer Society is an educational / conservation organization. Seed farming's not our thing.

I was thinking seed and propagation should fit into the society's conservation goals. I would think the communication and location of seeds for propagation would be of great help. Sheffield Seed Co. prices are always the highest around and it's hard to work high prices into many budgets these days. But thank you for the reply. And if anyone sees this and has white pine seeds for sale here's my number (607) 244-0178.

Jim it sure does! We have had a seed exchange for years but it has never been on the scale that you are seeking. We are 100% volunteer, so many initiatives that we would like to undertake we simply are not able to, due to lack of funds or manpower. But we'll add it to our wish list!

I ordered and bought what were to be the native eastern white pine from Millican Nurseries. None of the 3 resemble the native eastern white pine i see growing all around where I live in Maine. Millican Nurseries refuses to provide me with the source/growing information. How can I find out if what I bought are actually one of the 131 cultivars? Thank you.

Hi Cindy ... thank you for your question. Unless you see a graft union, you're working with seedlings, not one of the cultivars. All of the 131 cultivars are propagated through grafting. Seedlings vary a lot at first. I wouldn't worry too much about ID until they're five years old or so. If the foliage matches our pictures, there's little reason to doubt that they're Pinus strobus.

Hi Maxwell,
Thank you for the reply and the excellent information. I am learning all of the time. I will look on line for what a graft union looks like so I will know what to look for.

One of our white pines looks alarming after a sudden dip in temperature, zone 6a. Kept all our trees well watered during our summer drought. The bottom branch segment looks dried out and or frozen. Now it’s moving upwards in the tree. Have a picture I’d like to send.