Pinus sabiniana, as described in 1832 by David Douglas (1798–1834), ex David Don (1799–1841), in A Description of the Genus Pinus, 3rd edition, written by Aylmer Bourke Lambert (1761–1842), is commonly known as gray, ghost, or foothills pine. Up until quite recently this conifer was most commonly called digger pine, named that due to common use in referring to Native American tribes that were collectively and colloquially referred to as "diggers." However, that term has fallen into disgrace.

As explained by Melvin Hunter, in his 1991 opinion piece, Racist Relics: An Ugly Blight On Our Botanical Nomenclature, written for, The Scientist.com, "many Native Americans find the term digger offensive." A spokesman for the California State Native American Heritage Commission, who requests anonymity, says, "The word `digger' is very derogatory and insulting to California Indian people." A historical interpreter for the California State Indian Museum in Sacramento, who also requests anonymity, agrees. "To call a California Indian a `digger' means you are either ignorant or you are purposely trying to insult him. It is a very derisive word." These observers concur in the opinion that "the term digger is as offensive to California's Native Americans as the term 'nigger' is to African Americans." The terms "gray pine," "foothills pine," or "ghost pine" are now officially preferred.

The scientific name with its standard spelling, sabiniana commemorates English lawyer, naturalist and horticultural writer, Joseph Sabine (1770 - 1837), honorary secretary of the Horticultural Society of London (1810 - 1812). In botanical nomenclature it is no longer customary to Latinize species names (such as Sabine to sabinius and sabiniana) before forming Neo-Latin terms, so an orthographical correction was proposed from sabiniana to sabineana by some botanists. However the new spelling proposal has not been accepted by the United States Department of Agriculture (USDA) National Plant Data Center, or the University of California's "The Jepson Manual". Nor has it been adopted into general use, with the spelling sabiniana used in the pine's endemic range by the University of California and state agencies, and in its home country's U.S. federal agencies. The USDA's Germplasm Resources Information Network (GRIN) database notes that the spelling sabiniana agrees with a provision in the Vienna Code of the International Code of Botanical Nomenclature, the governing body of botanical nomenclature. In that Code, Recommendation 60.2C states that personal names that are already in Latin or Greek, or those that have a well-established Latinized form can remain Latinized in species epithets, otherwise species epithets must be orthographically corrected to the proper form. The GRIN database notes that Sabine's last name is not correctable and therefore Pinus sabiniana is the proper name for the species.

Description. Gray pine is an evergreen, coniferous species of tree that grows to mature heights of 40 to 70 feet (12 - 21 m) with a straight to crooked, often forked trunk up to 25 to 48 inches (60 - 120 cm) in diameter, measured at breast height; and a conic to raggedly lobed, sparse crown.

Distribution. This species is native to USA — California through the Coast Ranges and the Sierra Nevada, nearly ringing the Central Valley, growing in dry foothills. In Oregon, it is local in Douglas, Jackson and Josephine counties. It is typically found growing at elevations of 1,000 to 3,000 feet (300 - 900 m) above sea level. Associated trees include California Blue oak (Quercus douglasii) or canyon live oak (Quercus chrysolepis). The climate is Mediterranean, with annual mean precipitation of 20 inches (500 mm), ranging from 3 to 40 inches (75 to 1,000 mm). Eighty percent of precipitation occurs during winter and early spring. Snow falls occasionally. The annual mean temperature is 60°F (16°C), with maximum summer temperatures sometimes above 105°F (41°C). Relative humidity is often 5 percent or lower in summer. 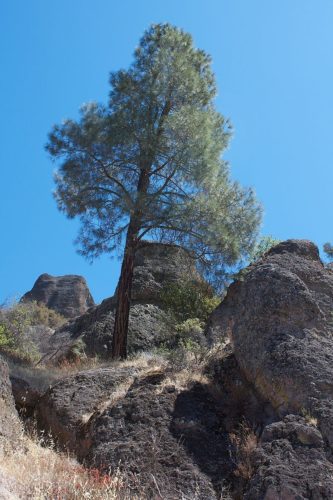 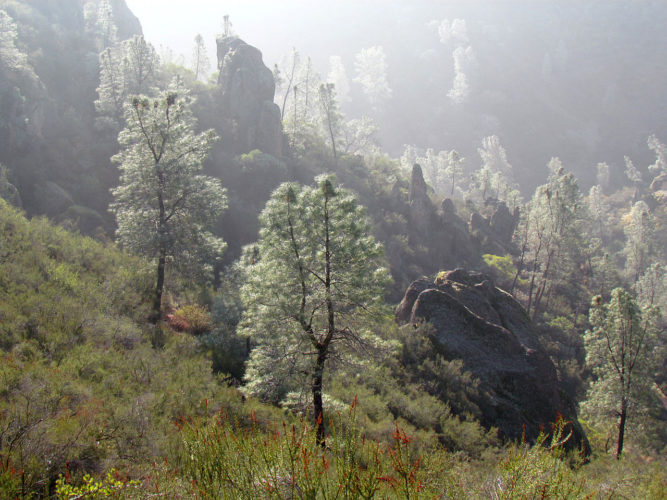 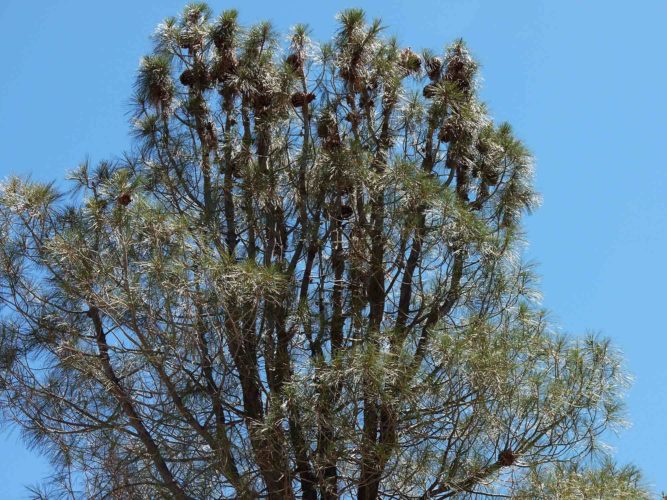 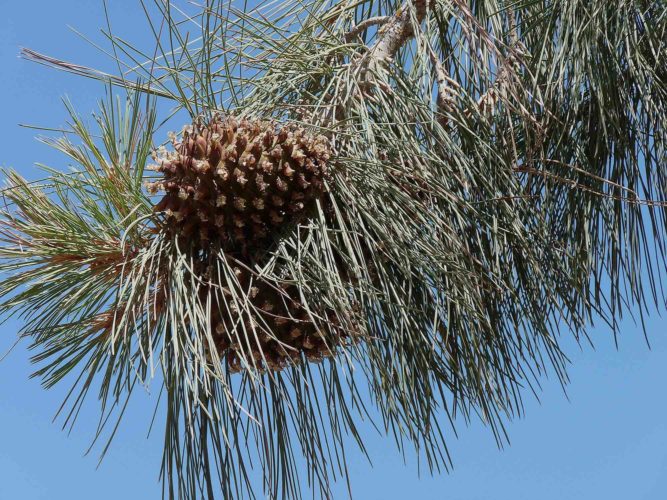 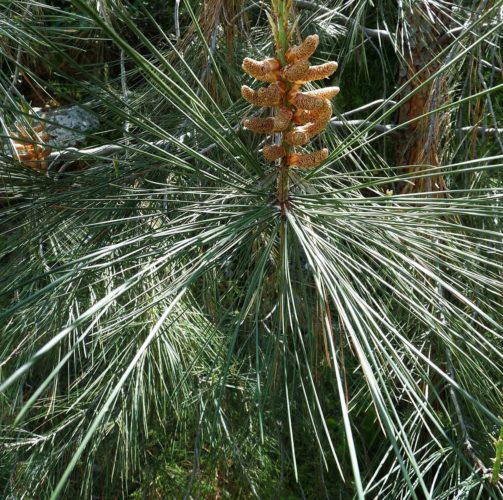 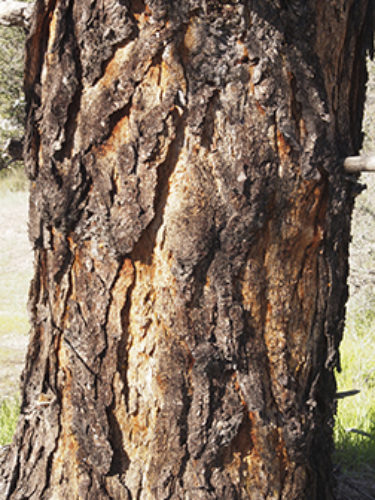 Contribute your photos to Pinus sabiniana