Pinus resinosa 'Baxter' is an attractive bushy selection of Red pine with 6-inch (30 cm) long dark green needles on exceptionally thick branchlets. Typical rate of growth in most areas is around 4 inches (20 cm) per year resulting in a uniform ball of long soft needles 3 feet (1 m) tall and somewhat wider after ten years in the garden or landscape. It should be noted that the thick branch caliper requires that the propagator use older understock to allow for a good take. For this reason the cultivar is rare to the trade as it is more costly to produce.

Byron Baxter, owner of Baxter Dendrological sales, New Richmond, Ohio is credited with the origin and naming of this cultivar. The original propagation material was a witch's broom that he found along White Oak creek near Georgetown, Ohio in 1997. Stanley and Sons nursery, Boring, Oregon introduced it to the nursery trade shortly thereafter. To this day 'Baxter' is quite scarce in the trade, only being produced by a couple of nurseries in the U.S.

A number of nomenclature errors exist with this particular cultivar. It is often seen listed as a Pinus ponderosa cultivar and with variations in the cultivar such as 'Baxteri' as well as names including descriptions such as "Left Side" and "Right Side." These particular descriptions arose because when Byron Baxter first collected material from the broom, he thought that there were two brooms on the same tree, growing side by side. As the original broom aged and lost lower needles it because obvious that there was, in fact, only one broom. 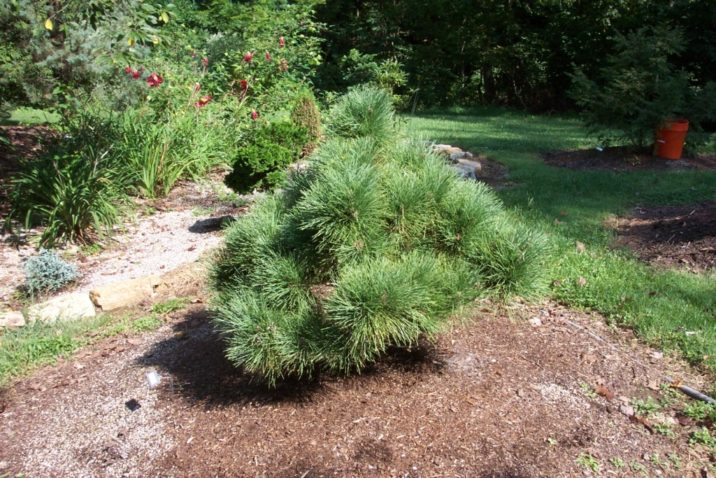 Pinus resinosa 'Baxter' the original propagation from 1998 at the Stanley and Sons nursery, Boring, Oregon, USA.
Photo by Byron Baxter