Ethnobotany. It is a common ornamental, and a popular tree for bonsai. It was introduced to England in 1861 by John Gould Veitch and has become quite popular in English gardens.

Description. Japanese white pine is an evergreen, coniferous species of tree that grows to mature heights of 80 feet (25 m) with a massive, straight (sometimes split into two or more stems), trunk up to 40 inches (100 cm) in diameter, measured at breast height; and an irregular crown that flattens in old trees.

Pinus parviflora has been used in the art of Bonsai for centuries, particularly plants selected with shorter-than-typical needles. The specimen on the left is on display at the Arnold Arboretum, Boston, Massachusetts. It has been in training 1899 and shipped to the U.S. from Japan in 1913 to the Honorable Larz Anderson, who purchased a collection of bonsai while serving as US ambassador to Japan. The entire collection was donated to the Arnold Arboretum; this one was accessioned in July of 1949.

Distribution. This species is native to Korea (Ullung island) and Japan. Type variety is in west-central Honshu (southward from Fukushima Prefecture, mainly on Pacific Ocean side), Shikoku and Kyushu, growing at elevations of 750 to 6,000 feet (200 - 1800 m) above sea level. Var. pentaphylla is in southern Hokkaido and north to central Honshu (in central Honshu mainly on Japan Sea side), growing on sunny rocky slopes at elevations of 200 to 2,500 feet (60 - 800 m) above sea level in Hokkaido, and 1,000 to 8,000 feet (300 - 2500 m) in Honshu. This and P. koraiensis are the characteristic pines of subalpine areas of Japan; these two conifers probably covered much of the Honshu coastal area during the Pleistocene. 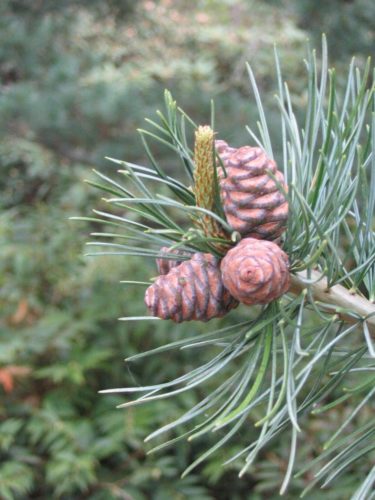 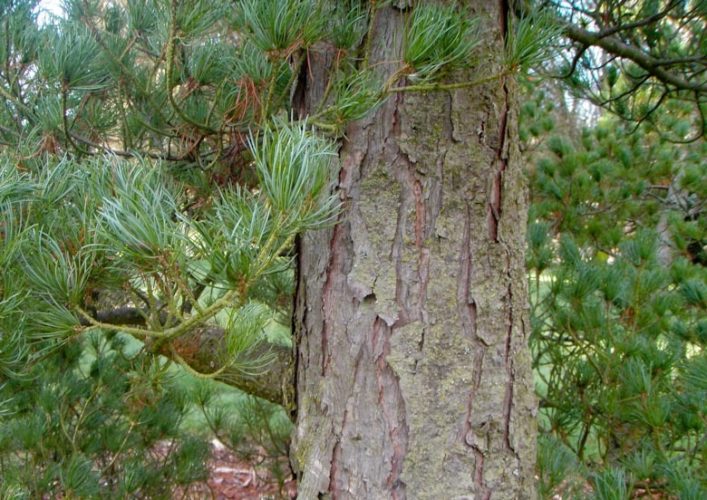 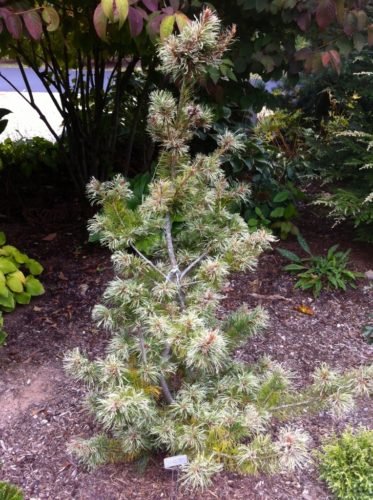 young cones and candle of Pinus parviflora 'Glauca' atop Comstock Knoll at Cornell Plantations
Photo by Phil Syphrit/Cornell Plantations
young cones and candle of Pinus parviflora — bark detail.
Photo by C.J. Earle
This variegated Japanese White Pine is about 10 years old in Brunswick, ME, 2013. It's getting too much sun and will be moved to preserve the bud tips which are starting to burn.
Photo by Sean Callahan

Contribute your photos to Pinus parviflora

Can you tell me if there are specific types of Japanese white pines that may survive the heat better than others? I'm not having much luck growing them as bonsai's in zone 10.

hello John ... are you in Zone 10 Florida or Zone 10 California? If you can find a parv with a southern Japanese provenance you may have better luck. However southern Japan is very humid with copious summer rainfall. That's why I asked if you were southern Florida or California.

Thanks David. Yes, it’s very dry here in So. CA.
I wet my pines a bit almost every day. I hadn't thought of that but it makes good sense. Do you know what type of Parv. that may grow there, or might you have a good source of purchasing trees from Japan? I’ve done just a bit of research and found little written in English in looking for trees.
Thanks again - John

Is it okay to plant the fukai variety outdoors in a large pot?

sure ... I just hope you like to prune (roots too). This one grows pretty fast.

According to the tag, the Fukai Japanese White Pine takes 10 years to become 10 feet tall and 2 feet wide. Are we talking about the same tree?

I've seen first hand that this tree can grow up to 2 feet per year with a spread nearly as wide as height, so (little surprise) the tag is wrong.

I have a mature Japanese white pine bonsai (I believe it to be 35 to 40 years old) I was given as a gift over the winter. I have been reading all I can on the care of this tree but am getting conflicting advice one decandling. Some say it should be done now in May・June period others say you don't touch it until the fall. Some advise de-needling now and decandle in the fall? Any advise?

I have an 11-foor Pinus parviflora 'Glauca" that was planted in 2017. Every year, the needles on the bottom branches turn yellow and fall off. This year is the worst. I live on Lake Michigan about 10 miles north of downtown Milwaukee, WI. Any suggestions or recommendations for a conifer specialist in the area that I could contact?

Hi Deborah ... white pines will shed up to 50% of their old needles every fall. It's normal behavior for this species. As far as "local specialists ... " I recommend that you join the ACS. Members have access to the membership database where you can find like-minded members in your area. Good luck.

Happy New Year 2022 I am looking for rootstock suggestions for some pine grafting projects some I only have common names for them. if there is a compatibility chart that may be helpful also Pinus parviflora Brevifolia 5 needle and Golden Ghost 2 needle

for the 'Brevifolia', (and any other 5-needled pine), use Pinus strobus, unless you're in Europe. There you can get Pinus armandii, which is superior.

for the 'Golden Ghost' ... since it's a Pinus densiflora, use Pinus sylvestris as your understock. They're closely related and it'll work well for you.

thank you very much for such a rapid reply

hello I am a 7th grader doing a science project about plants and I was wondering how a Japanese White Pine reproduces.

Madi the Japan white pine reproduces . Like most pine trees . The tree produces pine cones . When the cones mature they open up there scales . Inside are seeds . The wind will disperse the seeds . Also the seeds are eaten by different animals . Like squirrels and birds . The animals spread the seeds . When they excrete the seeds . If you collect pine cones you can open the cones by drying them and grow the seeds