The species name is derived from mid-18th century, partly from the Italian term mugo, meaning "small mountain pine" (plural mughi; 1563 in Mattioli; 1561 as mugho), probably of pre-Indo-European origin. Compare Italian regional (Trent) mughi (plural), cited as a local word by Mattioli. Surprisingly, the name Pinus mugho is sometimes seen in the nursery trade. This first happened, presumably, as a typographical error in an 18th-century encyclopedia.

Ethnobotany. According to various experts and local European authorities, this conifer is used to protect soil against erosion and to retard avalanching. Its wood is hard and heavy. Needles are the source of oil, and are also used for a delicious herbal tea in Bulgaria. As an ornamental it is very popular with rock and landscape gardeners, particularly in Scandinavia, Holland and Germany, where it is widespread in municipal parks and gardens.

Description. Mountain pine is an extremely variable coniferous species of shrub or (rarely) small tree that grows to mature heights 10 to 18 feet (3 - 5 m) tall, with one or more curved trunks. Plants usually monoecious, although rarely subdioecious.

Distribution. This species is native to central and southeastern Europe, east from the central Alps near the Swiss-Austrian border, the Erzgebirge east to the Carpathians and southeast through Yugoslavia and Romania to the Rila and Pirin mountainss of Bulgaria, with an isolated population in the central Italian Apennines, and outliers within the range of subspecies uncinata west to the Vosges and French Alps. It grows at elevations of 4,300 to 8,000 feet (1,400 - 2,500) above sea level, mostly in the high subalpine region at and above the timberline, but also at lower altitudes in peat bogs and frost hollows, exceptionally as low as 650 feet (200 m) in southeastern Germany and southern Poland (Jovanovic 1986. Its highest altitudes are reached in the extreme south of its range in the Pirin mountains of southwestern Bulgaria, where it reaches at least 9,000 feet (2,700 m). It also occurs in Croatia, where it is protected by law.

The species is also naturalized in Canada — Alberta, British Columbia, Ontario, and Québec; and the USA: Massachusetts, Michigan, Minnesota, New Hampshire, and Wisconsin. 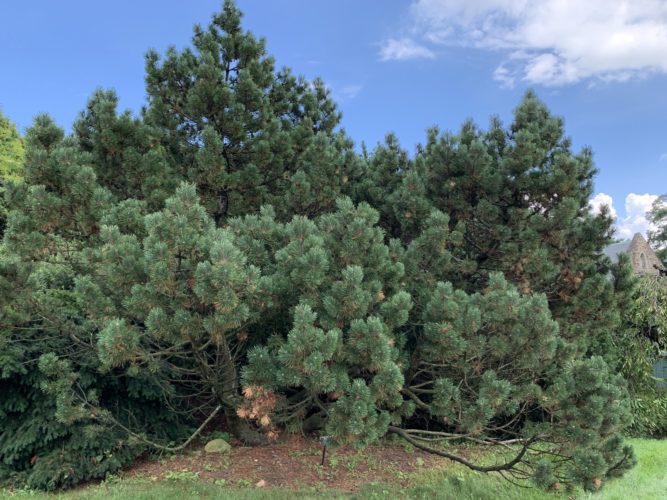 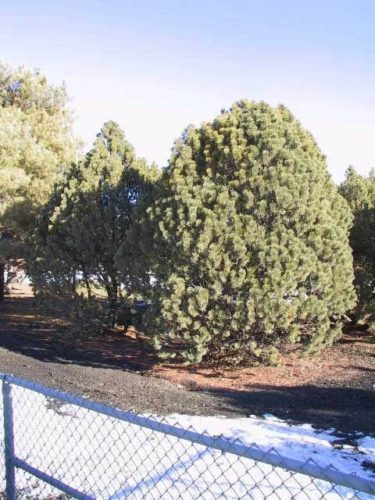 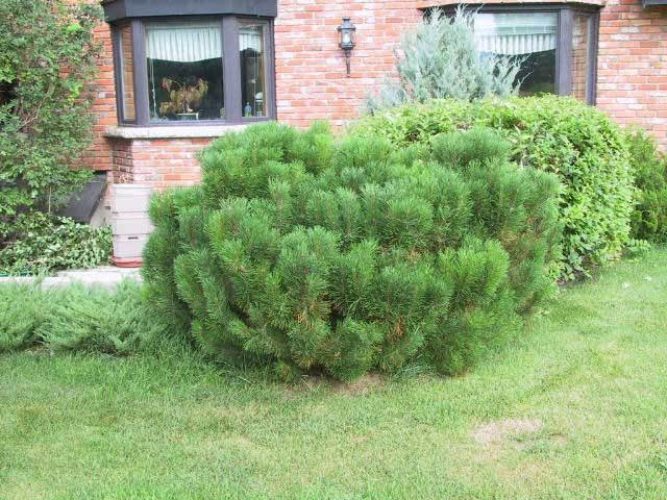 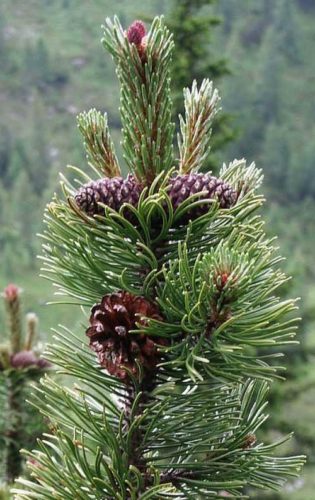 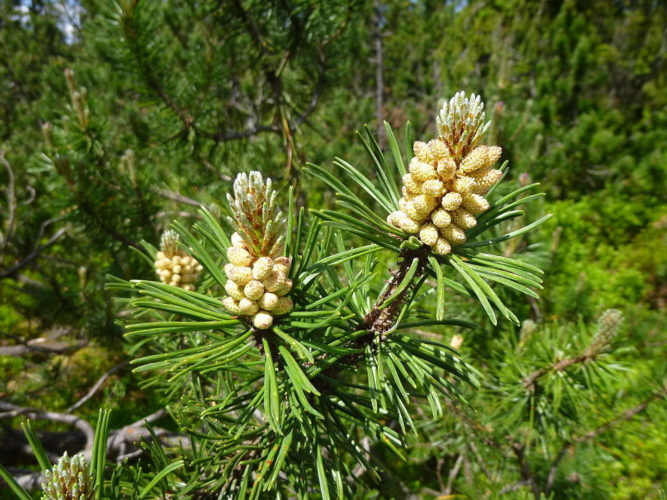 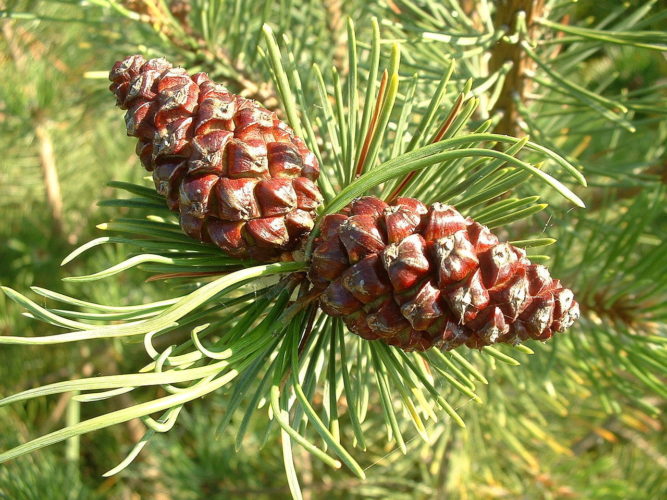 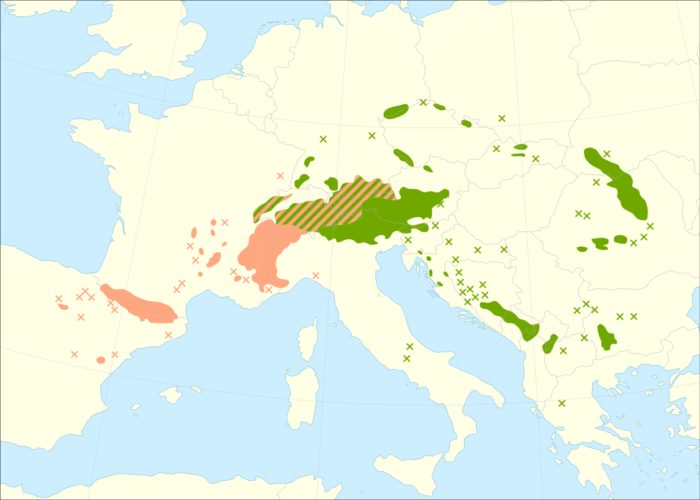 Pinus mugo — a 1996 accession at the New York Botanical Garden, The Bronx, New York (USDA Hardiness Zone 7a); photo from 2020.
Photo by Katherine Wagner-Reiss
This picture was taken during the winter of 2002-3. Pinus mugo comes in many shapes and sizes. This is a typical form.
Photo by Ken Church
This picture is of a species plant taken in my yard in 2002. I candle prune this plant yearly to keep it in check otherwise it would have outgrown its location.
Photo by Ken Church
Foliage and seed cones of mountain pine photographed in Germany, 2004.
Photo by Bergkiefer via Wikipedia
Pinus mugo — a closeup of pollen cone detail.
Pinus mugo — foliage and immature seed cone detail.
Photo by Queryzo, via Wikipedia; Public Domain photo

Contribute your photos to Pinus mugo

Hi...I was hoping to find a supplier of certain mugo pine seeds. I'm from Edmonton, Alberta and was wanting to start a small tree farm of Big Tuna and Tannenbaum varieties. Thanks for any help you may have in this matter.

hi Shaun. You are aware that seedlings of named cultivars won't be true to form right? In fact, you're not allowed to raise seedlings of 'Big Tuna' or 'Tannenbaum' and call them by those names. If you did, it could potentially create a huge mess in the nursery trade.

Specific cultivars are 100% propagated asexually, either by grafting or occasionally by rooting cuttings. Because of this, there is not market for cultivar seed.

Hi, I’m wondering if it is safe to drink tea from the needles of a mugo pine?

Hi ... The American Conifer Society's mission is to promote the use of conifers in the landscape and their preservation in Nature. We will never take an official stance on their use in the human diet.

Not sure about the use of the needles, which falls under the category of phytotherapy. But in phytembryotherapy (or gemmotherapy), pinus mugo is one of the most well known and important trees. On the other hand, phytembryotherapy is perhaps not the use you have in mind.

is there a reason Pinus mugo ‘Columnaris’ is not listed here as a trinomial? It is listed at Isely Nursery: https://www.iselinursery.com/colorful-conifers/pinus-pine/pinus-mugo-columnaris/