[Exerpt from American Conifer Society Bulletin - Fall 1986]
Jim Lounsbery
Vineland Station. Ontario
'Royal Knight,' a striking cultivar of Colorado Blue spruce, was named and offered to the nursery trade in 1983 by John Vermeulen & Son, Inc., of New Jersey. The tree is a uniform compact pyramid, and the colour is slightly darker than Koster. Vermeulen's catalogue describes it as a "nice colonial Blue."
Unlike 'Hoopsi' or 'Morheim', 'Royal Knight' develops its straight well-filled outline without pruning or staking. It also has the advantage of being easy to propagate by grafting.
'Royal Knight' had its origin in the Niagara region of Canada. Dave Bakker of J.C. Bakker & Sons Nursery was the man responsible for identifying this cultivar. In 1955, he noticed a batch of exceptional Blue seedlings growing in a local nursery owned by John Alexander. The seed had been hand picked from 'Koster' or 'Morheim' Blue spruce. Intrigued, he asked Mr. Alexander to him a few thousand two-year seedlings. One of these seedlings particularly caught Dave Bakker's fancy and he refused to sell it with its brother seedlings, even though he had no specific plans for it. After being transplanted around the field a few times, the tree ended up in the front yard of Dave's brother John. It is still there. A scion of this tree was eventually planted in Dave's own yard.
In 1972, a group from the Intemational Plant Propagators' Society was touring the nursery, and some of them commented on the beautiful specimen growing in the garden of the adjacent residence. Shortly afterwards, Peter Vermeulen contacted Bakker to ask for scions to graft and grow. Eleven years later 'Royal Knight' made its debut. 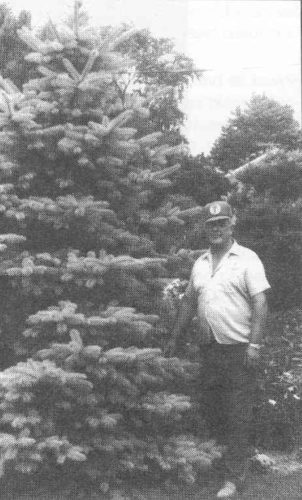 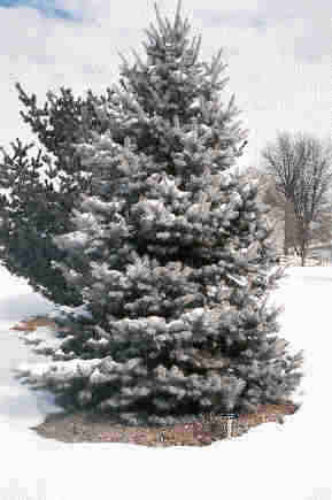 Dave Bakker standing next to [Exerpt from American Conifer Society Bulletin - Fall 1986]
Photo by Jim Lounsbery
Picea pungens 'Royal Knight' This photo was taken in the Heartland Collection of Dwarf and Rare Conifers at the Bickelhaupt Arboretum, Clinton Iowa on 2/3/03. The plant shown was 16 years of age on that date.
Photo by Dax Herbst - from Rock Island, IL