Information copied from US patent information.

Tree: Short, bushy globose, with a single straight trunk and branchlets of two kinds, persistent and deciduous. The persistent is bright reddish brown when young, shallowly ridged, carrying the deciduous branchlets, numerous vegetative buds and a few leaves. The green deciduous branchlets are up to about 3" long, usually opposite in arrangement, more or less horizontal, ribbed with long decurrent bases of up to 55-65 or more leaves.

Parentage: Metasequoia glyptostroboides (common type). The new cultivar, `Golden Dawn`, was reproduced by grafting hardwood scions of `Golden Dawn` onto the understock of Metasequoia glyptostroboides. The mutation was not artificially induced, and the cause of the mutation is unknown. The precise parentage of the mutated seedling (from which the new cultivar was cultivated) is also unknown.

Foliage: Leaves are deciduous, opposite in arrangement, linear, flattened, straight or slightly curved, arranged comb-like, obtusely pointed, tapering abruptly towards the juncture with the branchlet. They are 5/16" and 1/16" broad on a ten-year-old tree. Buds are non-resinous (opposite), usually in pairs at the base of deciduous branchlets but sometimes solitary between the branchlets; ovid in shape, about 1/16" long and 1/32" wide, scales light reddish or yellowish brown with a linear keel, appearing stalked.

Color: The leaf color is predominantly golden yellow, (or Royal Horticultural Society Colour Chart #154-C). Due to variations in the intensity of sunlight, the color may vary up to 10-D. The brighter the sunlight, the lighter the color will be. Also, the older the leaves, the lighter their color will be due to their longer exposure to sunlight. In the Fall the leaves change to a warm brown color similar to R.H.S. 173-C. Both the upper and lower surfaces of the leaves display the same color characteristics. The bark is warm russet brown (R.H.S. 174-A), when young, becoming darker, grayish (R.H.S. 201-A), fissured, and then exfoliating in long, narrow strips with age. The branchlets are a red-brown (R.H.S. 173-A.) 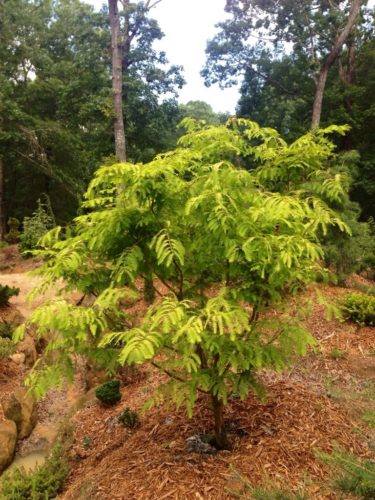