Juniperus cedrus, as described in 1847 by Philip Barker Webb (1793–1854) and Sabin Berthelot (1794–1880) in the 3rd edition of, Histoire Naturelle des Îles Canaries is commonly known as Canary Islands juniper or as Cedro Canario in the Spanish language.

Ethnobotany. According to M. Ashmole, P. Ashmole in their 1989 text, Natural history excursions in Tenerife, "the very valuable timber was extensively harvested in the first 500 years of Spanish occupation of the islands; now commercially extinct but replanting is in progress."

Juniperus cedrus is endangered in its native range due to a combination of the aforementioned historical felling for the valuable wood, and overgrazing by goats. It has been fully protected since 1953 and populations are very slowly recovering. Historical reports suggest trees up to 165 feet (30 m) tall occurred in the past; trees over 33 feet (10 m) tall are very rare now and confined to inaccessible cliffs.

It is occasionally grown as an ornamental tree in warm temperate climates, including New Zealand, the British Isles and California, but is not common in cultivation. There are also some small experimental plantations on the Canary Islands, where it has shown fast growth in good conditions, reaching about 40 feet (14 – 15 m) tall in 40 years.

Extraction of the wood with acetone, followed by analysis of the extract, indicate that the essential oil of Juniperus cedrus is particularly rich in thujopsene, which comprises around 2.2% of the weight of the heartwood.

Description. Canary Islands Juniper is a large shrub or tree growing to mature heights of 15 to 65 feet (5 – 20 m), with a trunk up to 20 inches (50 cm) in diameter, measured at breast height, but usually much smaller in nature today. The tree's crown is narrowly conical with slender, graceful branches from near the base, and numerous drooping branchlets.

Distribution. This species of juniper is native to the western Canary Islands (Tenerife, La Palma, Gran Canaria, Gomera) and Madeira (J. cedrus Webb & Berthel. subsp. maderensis (Menezes) Rivas Mart et al.), where it grows in subalpine woodlands and the upper ends of valleys at elevations of 1,500 to 7,700 feet (500 – 2400 m) above sea level. It is closely related to Juniperus oxycedrus (Prickly juniper) of the Mediterranean region and Juniperus brevifolia (Azores juniper) of the Azores. 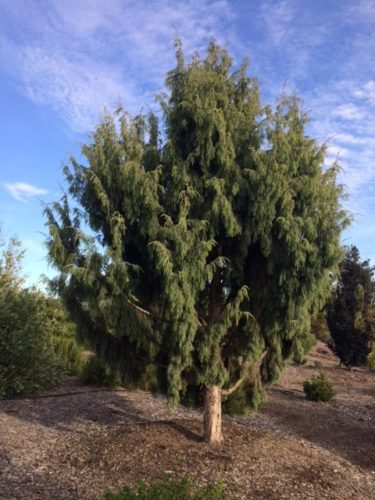 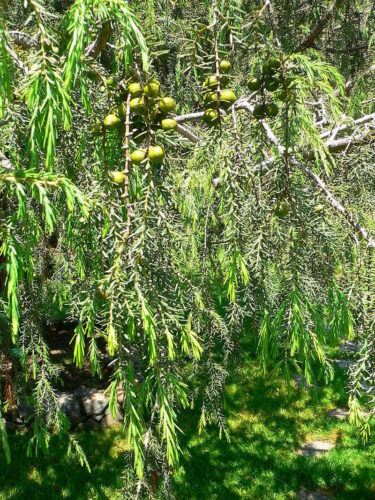 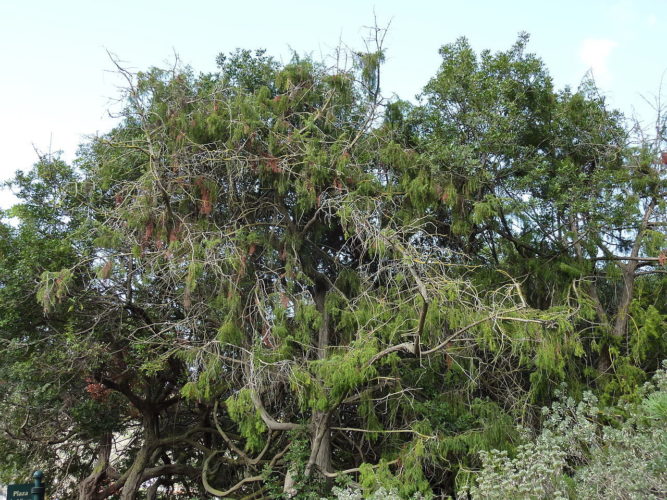 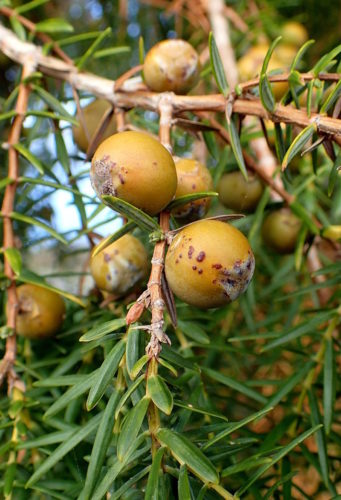 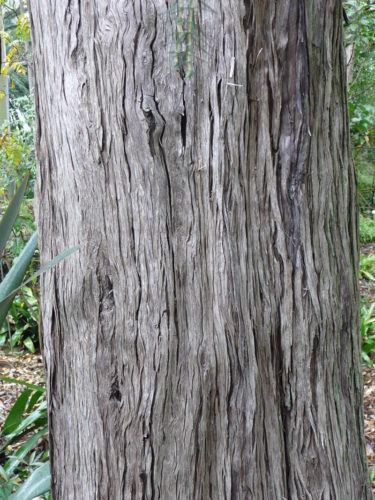 Contribute your photos to Juniperus cedrus