Ginkgo biloba 'Tshi Tschi' is an upright tree form of Maidenhair tree that is known for producing copious warty protrusions along its trunk and primary branches. After 10 years of growth, a mature specimen will measure 4 feet (1.3 m) tall and 3 feet (90 cm) wide, an annual growth rate of 4 to 6 inches (10 - 15 cm).

[ NewPlantPage.com: Denser, fan-shaped, dwarf, having a witches broom appearance at time. Bark produces numerous breast-shaped protuberances or swellings, some of which are said to be clusters of dormant buds. However, some of the protuberances are so large there are certain to be burl-like developments of wood rather than just buds.

[ Arrowhead Alpines Nursery, Fowlerville, MI: Back again after a brief absence and more entertaining than Nip/Tuck reruns, we proudly present the perfect plant for all those customers with the annoying touchy feely plant fondling fetishes. Now you can get that out of your system before you visit the nursery and maul our display troughs. 'Tschi -Tschi', also listed as Chi-Chi, by nurseries that apparently think Ginkgo originated in Mexico is indeed a botanical classic. How could you pass up a Ginkgo with breasts? Hey they even sag with age albeit more slowly than human ones. Even a thousand years from now the future, owners of your property can gaze in wonder at your kinky taste. ]

This conifer was selected and named from a plant found long ago in the wild in China. It was probably first seen in the western nursery trade in Holland in the 1970s, and did not reach the US in any big way until the 1990s. The cultivar name literally means breast and has numerous spellings and translations. The original Asian cultivar name requires no renaming in the Western world as done in times past. Nonetheless it is seen listed as 'Chi Chi', and 'Chi Chi Icho'. 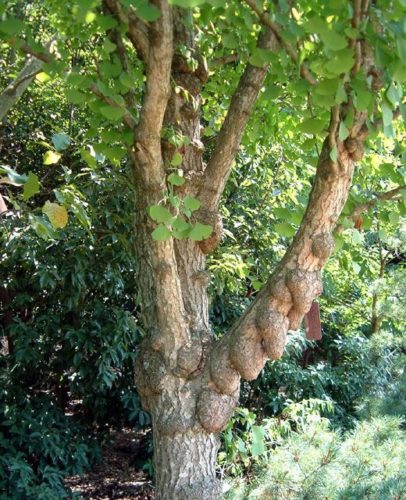 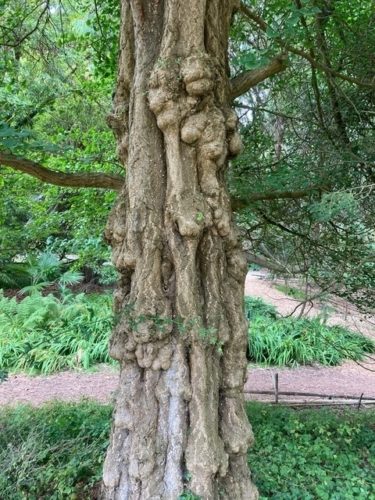 Ginkgo biloba 'Chi Chi' a good example of what this cultivar is named for. While most Ginkgo will produce these growths eventually with age, this clone exhibits them at a fairly young age.
Photo by NewPlantPage.com
Ginkgo biloba 'Tschi Tschi' at San Francisco Botanic Garden, an ACS Reference Garden.
Photo by Sara Malone