Ginkgo biloba 'Mariken' is a compact, dwarf, semi-pendulous selection of Maidenhair tree that's exceptional when grafted high on its understock. This male clone has thick young branchlets that are densely packed with succulent green leaves. After 10 years, a mature plant will become a flattened globe, 20 to 24 inches (50 - 60 cm) wide and half as tall, suggesting an annual growth rate of 2 inches (5 cm).

This cultivar originated as witch's broom found in 1995 by Piet Vergeldt in Kronenburger Park, Nijmegen, The Netherlands. This plant was one of three selected in 2010 for inclusion into the ACS Collectors' Conifer of the Year Program. 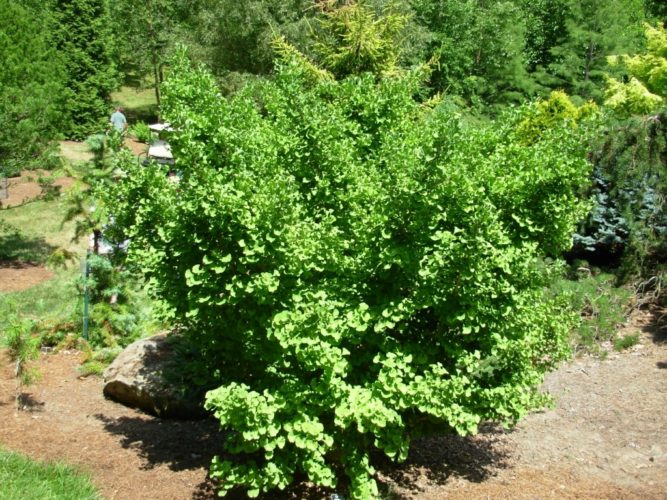 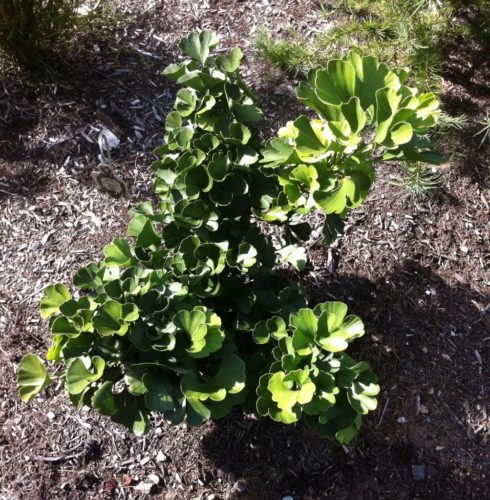 I am told it was named after Piet’s wife.

I have a Gingko Mariken that is 3 years old and arrived in dormancy. It is just now getting it’s first green leaf. Is this normal? The large Gingko street trees is town are already in full leaf.

I have about 40 Ginkgo and some are all leafed out and some just barely beginning. Not sure why this is so, as there is only one species of Ginkgo. I wouldn't worry as long as it leafs out eventually. My 'Mariken' has just barely begun to show green.

Mine is completely dormant, not a hint of leafing out and I'm absolutely positive it is alive. Within any species there will be always cultivars that wake up later than others. I would not worry at all.

I am delighted to report my Mariken is covered in emerging leaves!

I'm so happy for you! Ginkgos are really marvelous trees. And Mariken is a blessing, it allows people with small gardens that could never host a full size ginkgo to own one. You probably live in a warmer zone than I do. Mine is still completely dormant and it is better that way, here in Montreal (zone 5b) it still freezes during the nights until mid-May.

Thank you so much for your reply. I took a magnifying glass to my Gingko and saw 4 tiny tips of green! Patience pays off.