Cupressus × leylandii, first described in 1938 by (Dallim. & A. B. Jackson.) William Dallimore (1871–1959) is commonly known as the Leyland cypress, commonly seen described in other studies as × Cupressocyparis leylandii, Callitropsis × leylandii, or often simply as Leylandii, is a fast-growing coniferous evergreen tree much used in horticulture, primarily for hedges and screens. Even on sites of relatively poor culture, plants have been known to grow to heights of 50 feet (15 m) in 15 years. Their rapid, thick growth means they are sometimes used to enforce privacy, but such use can result in disputes with neighbors whose own property becomes overshadowed. It is a hybrid of two new-world cypresses, namely C. nootkatensis and C. macrocarpa.

The taxonomic status of Nootka Cypress (C. nootkatensis) is often disputed; in the past, it was widely regarded as belonging in the genus Chamaecyparis, and in 2002, it was classified into a new genus, Xanthocyparis. In 2004, Little et al. transferred it to Callitropsis, but in 2006, they proposed another alternative by transferring all the North American species of Cupressus, including the Monterey Cypress (C. macrocarpa), to Callitropsis. In any of these classifications, the hybrids become very unusual in being intergeneric hybrids, the only ones ever reported among the Gymnosperms.

In fact the very existence of these hybrids, and their ease of formation, is a further strong pointer (in addition to genetic and morphological evidence) for the treatment of Nootka cypress in Cupressus. In 2010, Mao et al. performed a more detailed molecular analysis and placed Nootka Cypress to Cupressus. It may be added that attempts to cross Nootka cypress with other Chamaecyparis species have been universally unsuccessful. Where Nootka Cypress is treated in Chamaecyparis, the name of the hybrid became × Cupressocyparis leylandii, and where treated in Xanthocyparis, it was × Cuprocyparis leylandii. Now the Leyland cypress is simply a normal hybrid of two species within a single genus and is widely accepted as Cupressus × leylandii.

Two other similar hybrids have also been raised, both involving Nootka Cypress with other Cupressus species:

Leyland Cypress is light-demanding but is tolerant of high levels of pollution and salt spray. A hardy, fast-growing natural hybrid, it thrives on a variety of soils and sites are commonly planted in gardens to provide a quick boundary or shelter hedge, because of its rapid growth. Although widely used for screening, it has not been planted much for forestry purposes. In both forms of the hybrid, Leyland cypress combines the hardiness of the Nootka or Alaska cypress with the fast growth of the Monterey cypress.

The tallest Leyland cypress presently documented is about 130 feet (40 m) tall and still growing. However, because their roots are relatively shallow, large C. leylandii tend to topple over. The shallow root structure also means that it is poorly adapted to areas with hot summers, such as the southern half of the U.S.A.. In these areas it is prone to develop cypress canker disease, which is caused by the fungus Seiridium cardinale. Canker causes extensive die back and ultimately kills the tree. In California’s Central Valley, they rarely live more than ten years before succumbing, and not much longer in southern states like Alabama. In these areas, the canker-resistant Arizona Cypress is much more successful. In Northern areas where heavy snows occur, this plant is also susceptible to broken branches and uprooting in wet, heavy snow.The tree has also been introduced in Kenya on parts of Mount Kenya.

In 1845, the Leighton Hall, Powys estate in Wales was purchased by Liverpool banker Christopher Leyland. In 1847, he gave it to his nephew John Naylor (1813–1889). Naylor commissioned Edward Kemp to lay out the gardens, which included redwoods, monkey puzzle trees and two North American species of conifers in close proximity to each other – Monterey cypress and Nootka cypress. The two parent species would not likely cross in the wild as their natural ranges are more than 400 miles apart, but in 1888 the hybrid cross occurred when the female flowers or cones of Nootka cypress were fertilized by pollen from Monterey cypress.

John Naylor’s eldest son Christopher John (1849–1926) inherited Leighton Hall from his father in 1889. Christopher was a sea captain by trade. In 1891 he inherited the Leyland Entailed Estates established under the will of his great-great-uncle, which passed to him following the death of his uncle Thomas Leyland. On receiving the inheritance Christopher changed his surname to Leyland, and moved to Haggerston Castle, Northumberland. He further developed the hybrid at his new home, and hence named the first clone variant ‘Haggerston Grey’. His younger brother John (1856–1906) resultantly inherited Leighton Hall, and when in 1911 the reverse hybrid of the cones of the Monterey Cypress were fertilized with pollen from the Nootka, that hybrid was baptized ‘Leighton Green.’

The hybrid has since arisen on nearly 20 separate occasions, always by open pollination, showing the two species are readily compatible and closely related. As a hybrid, Leyland cypress is sterile, so all the trees we now see have resulted from cuttings originating from those few plants. There are over forty selected cultivars of Leyland Cypress, and as well as ‘Haggerston Grey’ and ‘Leighton Green’, other well-known forms include ‘Stapehill’, which was discovered in 1940 in a garden in Ferndown, Dorset by M. Barthelemy and ‘Castlewellan’, which originated from a single mutant tree in the Castlewellan estate arboretum in Northern Ireland. This form, widely propagated from the 1970s, was selected by the park director, John Keown, and was named Cupressus macrocarpa ‘Keownii’ in 1963.

In 1925, a firm of commercial nurserymen specializing in conifers was looking for a breed which was fast growing, and could be deployed in hard to grow windy and salty areas such as Cornwall. Eventually they found the six original trees developed by Leyland, and began propagating the species. In 1953, a freak tornado blew down one of the original trees at Haggerston (the other original five trees still survive), on which the research division of the Forestry Commission started developing additional hybrids. Commercial nurseries spotted the plant’s potential, and for many years it was the biggest-selling item in every garden center in Great Britain, making up to 10% of their total sales.

It continues to be a popular plant for cultivation in parks and gardens. The cultivar ‘Gold Rider’ has gained the Royal Horticultural Society’s Award of Garden Merit (AGM), though the original hybrid has now lost its AGM status.

The plant’s rapid growth (up to a meter per year) and great potential height (often over 65 feet / 20 m) tall, sometimes as high as 115 feet (35 m) can become a serious problem. In 2005 in the United Kingdom, an estimated 17,000 people were at loggerheads over high hedges, which led to violence and in at least one case murder, when in 2001, retired Environment Agency officer Llandis Burdon, 57, was shot dead after an alleged dispute over a C. leylandii hedge in Talybont-on-Usk, Powys.

Part VIII of the United Kingdom’s Anti-Social Behavior Act 2003, introduced in 2005, gave a way for people affected by high hedges (usually, but not necessarily, of C. leylandii) to ask their local authority to investigate complaints about the hedges, and gave the authorities power to have the hedges reduced in height. In May 2008, UK resident Christine Wright won a 24 year legal battle to have her neighbor's C. leylandii trees cut down for blocking sunlight to her garden. 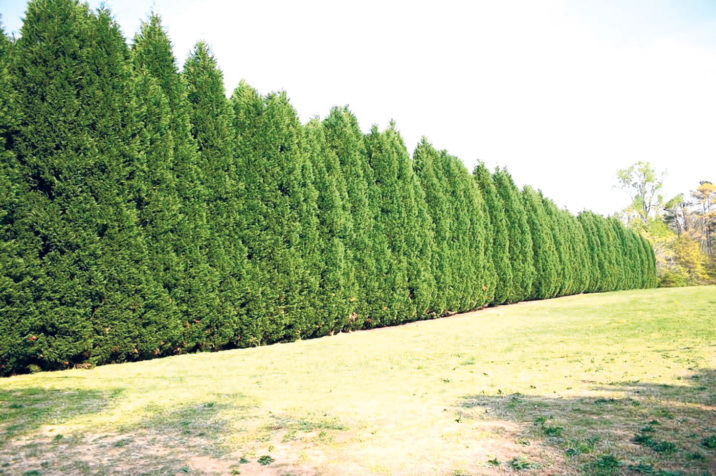 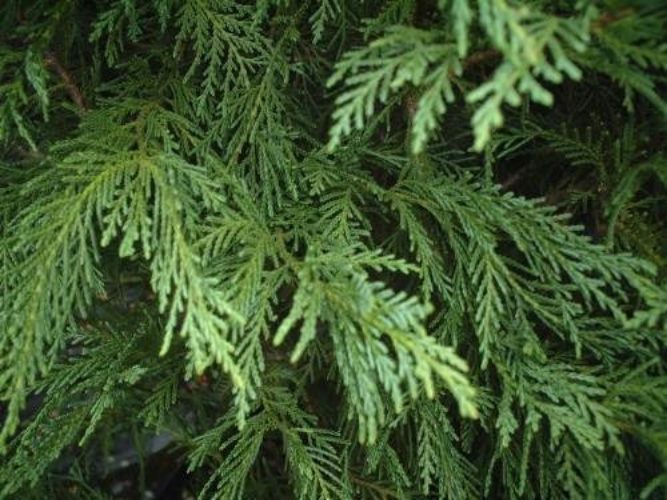 The ubiquitous hedgerow of Cupressus × leylandii
Cupressus ×leylandii — a closeup of foliage detail.

Contribute your photos to Cupressus × leylandii

I acquired some Leyland Cypress to turn on my lathe to make vases and bowls. It is hard to turn and tends to tare out. The knots are extremely hard making turning all the more difficult. The results are always dramatic if you work the wood long enough to make it smooth. The color and contrast makes for beautiful results. One positive, the pieces I turned were wet, yet after turning they didn't shrink or crack as they dried out.