Chamaecyparis obtusa 'Gemstone' is a very slow growing, sculpted selection of Hinoki cypress with a narrow, upright form. When young, it is reminiscent of a small, pointed wizard’s hat. As it matures, occasional side branches will develop adding aesthetic interest to the already pleasing, casual movement to its upward growing form. Typical rate of growth for most areas is less than one inch (2.5 cm) a year resulting in an irresistible, tight, tiny cone of green in the garden after 10 years.

[ History courtesy of Iseli Nursery and The Amazing World of Conifers Blog (http://coniferlover.wordpress....]

Iseli Nursery of Boring, Oregon selected the seedling that was to become this cultivar. In the early 1980s, a group of very mature Chamaecyparis obtusa ‘Nana Gracilis’ at Iseli Nursery produced a proliferation of viable seed. Thousands and thousands of seeds were planted, most of which germinated and the evaluation process began. The gene pool was vast that contributed to the pollination of the tiny cones that produced all of those seeds. Iseli Nursery had an extensive collection of mature cultivars which contributed to that pollination process. As a result, a very wide assortment of characteristics became visible rather quickly in the evaluation process. Some seedlings grew very quickly and appeared very much like the species, Chamaecyparis obtusa. Some were more vigorous, some less. The slower growing seedlings were given the most consideration – as were those with unusual coloration or different foliage types. Eventually those plants that were considered to have the least chance of commercial appeal were culled and the remaining plants were planted in the ground, sorted by growth rate, foliage type and foliage color.

Many years went by with regular evaluation. Some of these seedlings began to show great promise. Extremely slow growth rates, unusually dark green foliage, bright yellow foliage, fine textured foliage, sculptural growth forms – whatever made an individual plant stand out from the crowd and appear different than other known cultivars already named, either in collections or being marketed. Some of those seedlings were then selected and the propagation process began, spanning 15 to 20 years in the process. Some of those exciting new plants have started to become available in garden consumers through independent garden centers over the past few years. 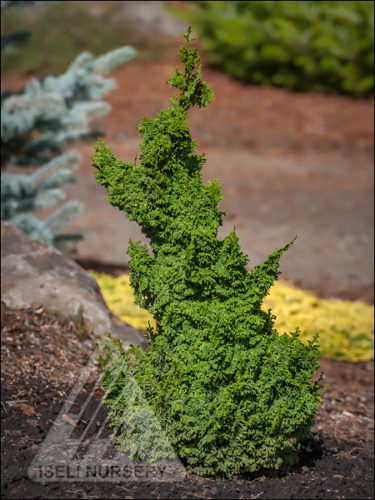