Calocedrus decurrens, as described in 1956 by John Torrey (1796–1873), Carl Rudolf Florin (1894-1965), in Taxon, vol.5:192, is commonly known as California incense-cedar, or California post-cedar; as well as cedro incienso in the Spanish language. In the Latin language, "decurrens" translates into, "hanging down the stem," which describes how seed cones are produced in this species.

Ethnobotany. The tree is widely grown as a valuable ornamental landscape tree. Formerly it was also an important timber species, much preferred for the manufacture of pencils due to its softness and isotropy. Although timber harvests have been reduced by depletion of old growth stands, its wood, exceptionally resistant to decay and highly durable when exposed to weather, is still useful for woodworking applications including cedar chests and closets.

Description. California incense-cedar is a large, resinous, aromatic, coniferous species of tree, typically growing to mature heights of 125 to 200 feet (40 – 60 m); with a tapering, irregularly angled trunk of up to 10 feet (3 m) in diameter measuring at breast height; and a broad conic crown of spreading branches.

Distribution. This species is native to western North America, with the bulk of the range in the United States, from central western Oregon through most of California and the extreme west of Nevada, and also a short distance into northwest Mexico in northern Baja California. It grows at elevations of 165 to 9,200 feet (50 – 2,900 m) above sea level.

Within its native range, the climate is characterized by dry summers, usually with less than 1 inch (25 mm) precipitation per month; annual temperature extremes are from -30° to 118°F (-34° - 48°C). Annual precipitation, part of which is snow, varies from 15 to 80 inches (380 - 2,030 mm), with the driest conditions found near the specie's northern limits in Oregon and northeast California. It grows on an exceptionally wide variety of soils, derived from silicate, serpentine, and carbonate parent materials, and textures ranging from coarse sand to clay.

This tree is the preferred host of a wood wasp, Syntexis libocedrii a living fossil species which lays its eggs in the smoldering wood immediately after a forest fire. The tree is also host to incense-cedar mistletoe (Phoradendron libocedri), a parasitic plant which can often be found hanging from its branches. 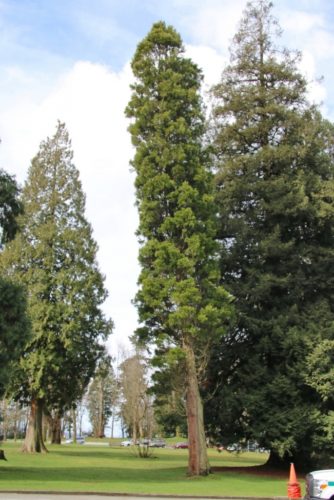 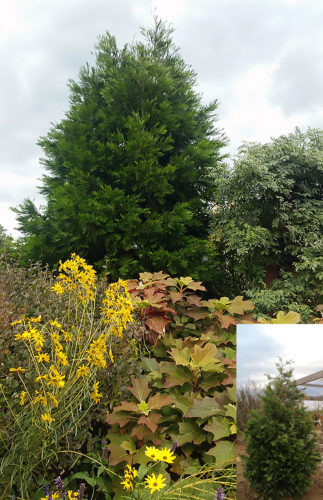 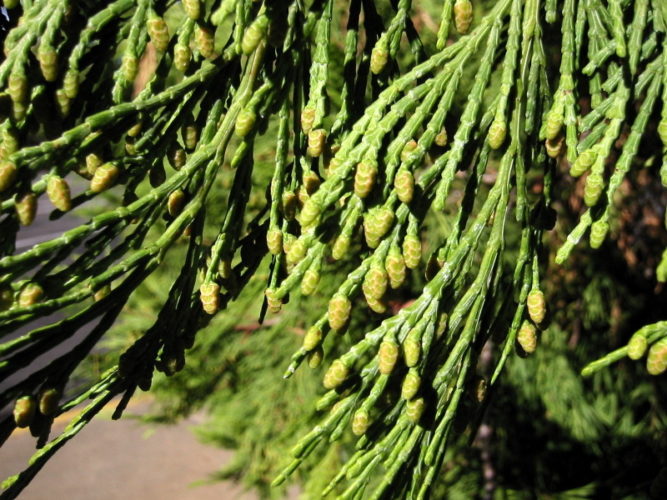 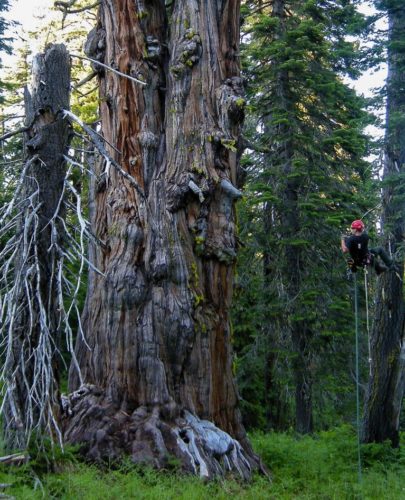 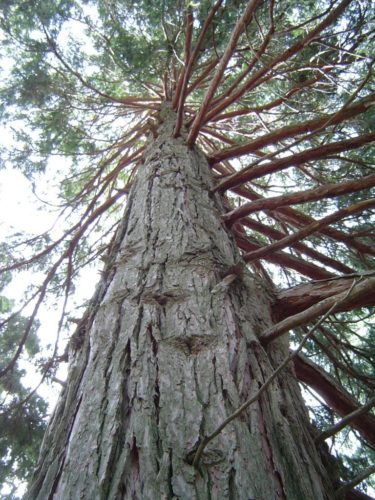 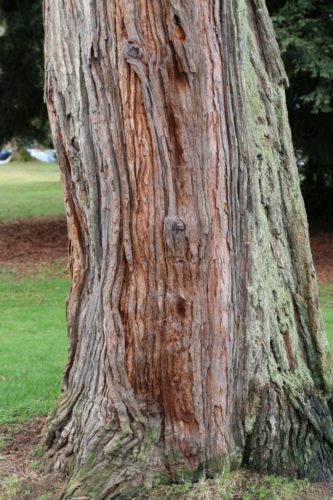 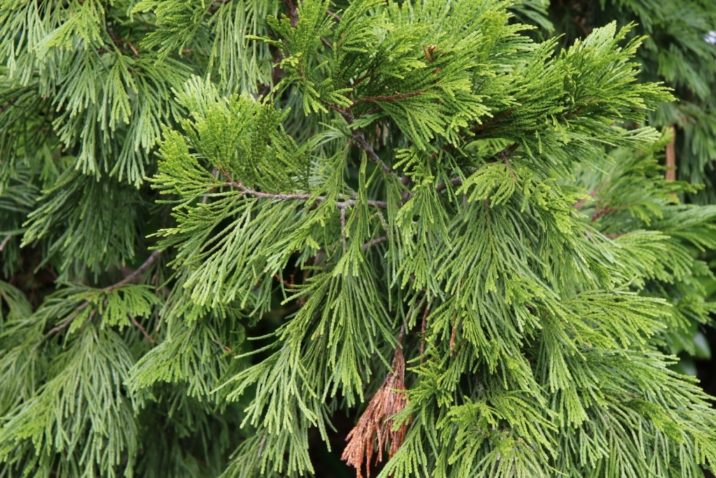 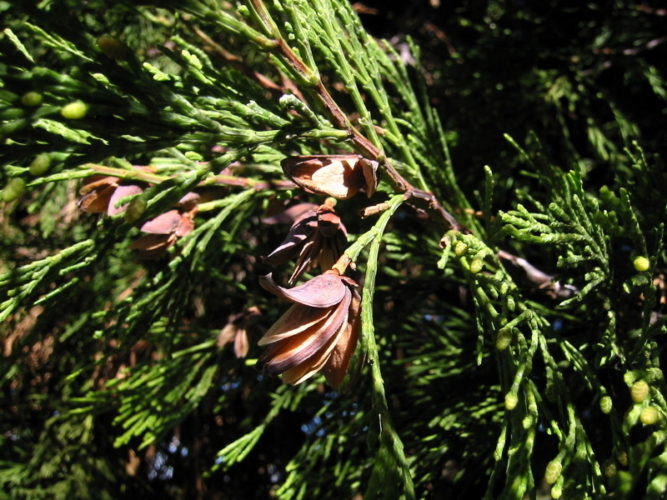 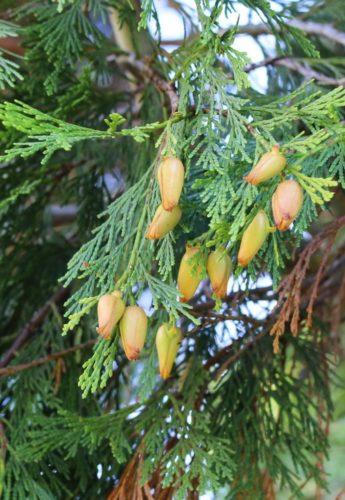 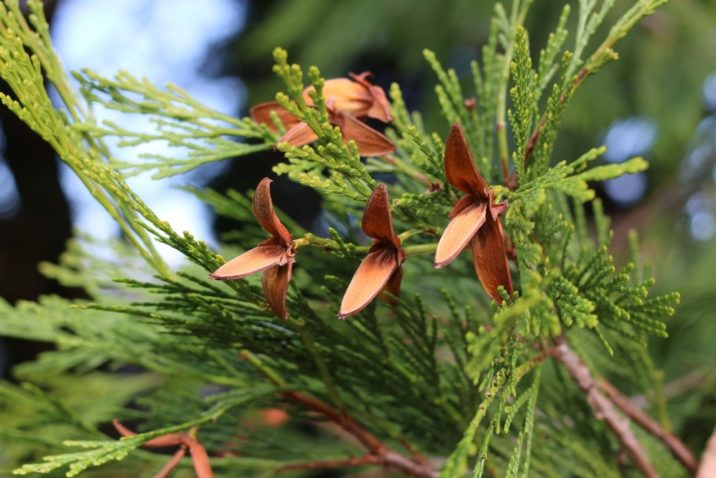 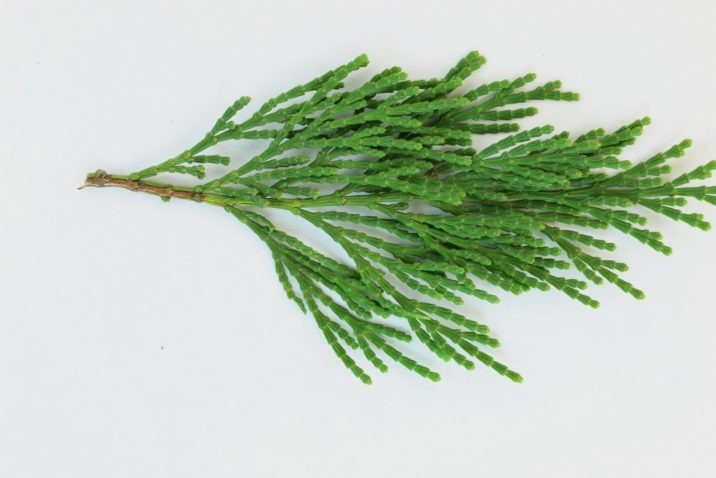 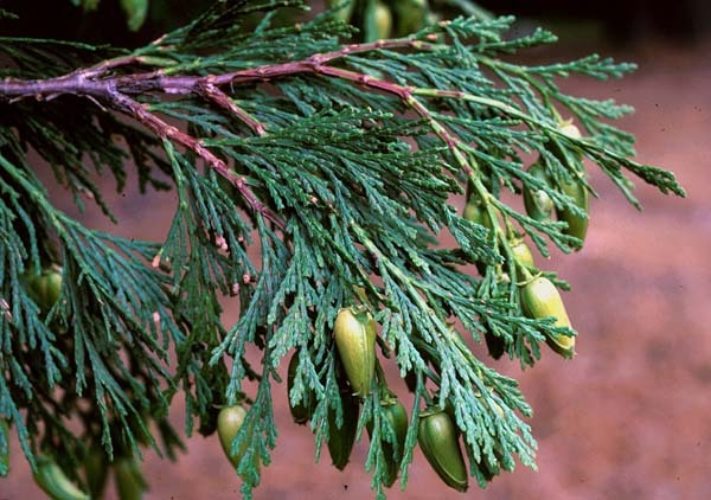 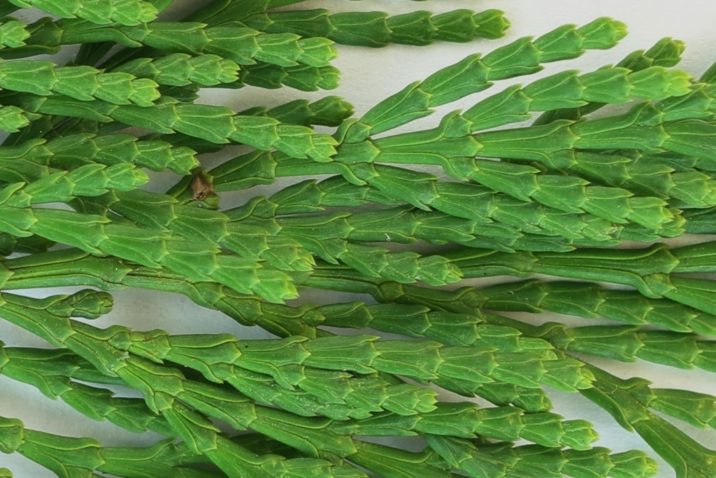 Contribute your photos to Calocedrus decurrens

Hello, what a pleasure to find your site.

Hello Austin ... distinctions between California incense-cedar and "what?" ... although Calocedrus decurrens is probably more closely related to juniper or cypress than to cedar, only plants in the Juniperus genus can rightly be called "junipers." I suspect that early botanical pioneers called everything they encountered with aromatic wood "cedars."

Common names can be a pain.

Thank you David for your reply yesterday (sorry I was away for the day).

What a pleasure to make the connection with you via the American Conifer Society. I look forward to reviewing the material / site, which surely holds a wealth of information for education and inspirational fellowship.

My first 'look see' was of your Conifer Quarterly, Summer 2018. Therein a most intimidating garden of Jack Christiansen >>> holy cow !! Then I progressed to your introductory letter to the Society, well done. Might I be correct in suspecting the photo was taken at Sequoia National Park ? Anyway all the best to you and your continued success with the ACS.

Thank you so much for your words of kindness, sir. Yes, my profile picture was taken during a recent adventure in Sequoia National Park. Big trees are awesome. I wish you the best and if you ever have any questions or concerns, by all means, fire away.

Hi, could you please tell me what is the best process to germinate the Calocedrus decurrens seeds?.
Thank you

Is this species milled and sold in the US as exterior siding?

I sure hope not ... we prefer to think about how awesome this species is in nature or in the landscape. The ACS really has very little to say about the lumber industry.