Araucaria bidwillii, first described in 1843 by Sir William Jackson Hooker (1785 – 1865), is commonly known as Bunya pine, or simply Bunya. It is the last surviving species of the Section Bunya of the genus Araucaria. This section was diverse and widespread during the Mesozoic with some species having cone morphology similar to A. bidwillii, which appeared during the Jurassic. Fossils of Section Bunya are found in South America and Europe. The scientific name honours the botanist John Carne Bidwill, who sent the first specimens to Sir William Hooker.

Description. Bunya pine is an monoecious evergreen coniferous species of tree which will grow to a mature height of 150 feet (50 m) tall with a 60 inch (150 cm) trunk diameter at breast height. Its crown is pyramidal in younger trees, becoming conspicuously dome-shaped in the mature tree, the outline of the crown defined by dense tufts of branchlets and foliage at the branch ends. As with most other Araucarias, the branches are produced from regular whorls. The bark is dark brown to black, flaking in scales up to 1 by 3 inches (2.5 × 7.5 cm), on mature trees it is usually 2 to 4 inches (5-10 cm) thick and deeply furrowed. Leaves differ between juvenile and mature trees. Those of juvenile trees (or perhaps, simply leaves produced in the shade of the forest understory) are glossy, light-green, and narrow, 1 to 2 inches (2.5 - 5 cm) long, and stiff with a sharp point. They are arranged in two rows on the branchlets.

Leaves of mature trees (leaves produced in the crown and exposed to the sun) are arrayed radially around the branchlet (and often are overlapping), spreading, glossy, dark-green, 0.3 to 1.12 inches (0.7 - 2.8 cm) long, lanceolate or triangular-ovate, flattened, coriaceous, lacking a midvein but with numerous, parallel, thin veins; stomatal lines are abaxial. Trees begin to bear cones at about 14 years of age. The northern populations differ from the southern in that the leaves are wider and not sharply pointed. Pollen cones, usually appearing in April and maturing in September or October, are are up to 8 inches (20 cm) long are axillary, solitary, and cylindric, produced on the ends of short lateral branches.

Seed cones are produced between December and March about 17 months after pollination. The cones are unmistakable — ovoid-subglobose, ca. 12 by 9 inches (30 × 22 cm), weighing up to 22 pounds (10 kg) and dark green in color. Each cone contains 50-100 seeds that are about 1 inch (2.5 cm) long, elongate-elliptic, wingless and encased in a thin, tough, buff-colored protective shell, which will split when boiled or put in a fire. The flavor of the kernel is similar to a chestnut.

A. bidwillii has unusual cryptogeal seed germination in which the seeds develop to form an underground tuber from which the aerial shoot later emerges. The actual emergence of the seed is then known to occur over several years presumably as a strategy to allow the seedlings to emerge under optimum climatic conditions or, it has been suggested, to avoid fire. This erratic germination has been one of the main problems in silviculture of the species.

Distribution. This species is native to Australia — in Queensland, historically trees were found in populations recorded as abundant and widespread in suitable habitats of South East Queensland and Wide Bay-Burnett (regions). In these regions of Queensland the natural ecosystems growing Bunya Pines have sustained European agricultural occupation and have been fragmented now into the areas of the Blackall Range, Bunya Mountains, upper Brisbane River reaches and upper Mary River valley. Natural ecosystems having Bunya Pines are found again approximately 620 miles (1,000 km) to the north, in the wet tropics region of north eastern Queensland. There the species natural populations are rare and restricted. Two, outlying, restricted, populations are known in the Cannabullen Falls and Mt. Lewis areas.

A. bidwillii has a limited distribution within Australia in part because of the drying out of Australia with loss of rainforest and poor seed dispersal. The remnant sites at the Bunya Mountains and Mount Lewis in Queensland have genetic diversity. The cones are large, soft-shelled and nutritious and fall intact to the ground beneath the tree before dehiscing. The suggestion that extinct large animals – perhaps dinosaurs and, later, large mammals – may have been dispersers for the Bunya is reasonable, given the seeds' size and energy content, but difficult to confirm given the incompleteness of the fossil record for coprolites.

At the start of European occupation, A. bidwillii occurred in great abundance in southern Queensland, to the extent that a Bunya Bunya Reserve was declared in 1840 to protect its habitat. The tree once grew in large groves or sprinkled regularly as an emergent species throughout other forest types on the Upper Stanley and Brisbane Rivers, Sunshine Coast hinterland (especially the Blackall Range near Montville and Maleny), and also towards and on the Bunya Mountains. Today, the species is usually encountered as very small groves or single trees in its former range, except on and near the Bunya Mountains, where it is still fairly prolific.

Natural populations of this species have been reduced in extent and abundance through exploitation for its timber, the construction of dams and historical clearing. Most populations are now protected in formal reserves and national parks.

Ethnobotany. A Bunya festival was recorded by Thomas (Tom) Petrie (1831–1910), who went with the Aboriginal people of Brisbane at the age of 14 to the festival at the Bunya Range (now the Blackall Range in the hinterland area of the Sunshine Coast). His daughter, Constance Petrie, put down his stories in which he said that the trees fruited at three-year intervals. The three-year interval may not be correct. Ludwig Leichhardt wrote in 1844 of his expedition to the Bunya feast. The Bunya trees pollinate in South East Queensland in September, October and the cones fall seventeen to eighteen months later in late January to early March from the coast to the current Bunya Mountains. When there is heavy rainfall or drought, pollination may vary. The large festival harvests may vary between two and seven years. When the fruit was ripe, the people of the region would set aside differences and gather in the Bon-yi Mountains (Bunya Mountains) to feast on the kernels.

As the fruit ripened, locals, who were bound by custodial obligations and rights, sent out messengers to invite people from hundreds of kilometers to meet at specific sites. The meetings involved ceremonies, dispute settlements and fights, marriage arrangements and the trading of goods. The Aborigines’ fierce protection of the trees and recognition of the value of the timber, led to colonial authorities prohibiting settlers from cutting the trees in the 1842. The resource was too valuable, however, and the aboriginals were driven out of the forests along with the ability to run the festivals. The forests were felled for timber and cleared to make way for cultivation.

In what was probably Australia's largest indigenous event, diverse tribes – up to thousands of people – once traveled great distances (from as far as Charleville, Dubbo, Bundaberg and Grafton) to the gatherings. They stayed for months, to celebrate and feast on the bunya nut. The bunya gatherings were an armistice accompanied by much trade exchange, and discussions and negotiations over marriage and regional issues. Due to the sacred status of the bunyas, some tribes would not camp amongst these trees. Also in some regions, the tree was never to be cut.

Indigenous Australians eat the nut of the bunya tree both raw and cooked (roasted, and in more recent times boiled), and also in its immature form. Traditionally, the nuts were additionally ground and made into a paste, which was eaten directly or cooked in hot coals to make bread. The nuts were also stored in the mud of running creeks, and eaten in a fermented state. This was considered a delicacy.Apart from consuming the nuts, Indigenous Australians ate bunya shoots, and utilized the tree's bark as kindling.

However its most popular use is as a 'bushfood' by indigenous foods enthusiasts. A huge variety of home-invented recipes now exists for the bunya nut; from pancakes, biscuits and breads, to casseroles, to 'bunya nut pesto' or hummus. The nut is considered nutritious, with a unique flavour similar to starchy potato and chestnut. The nutritional content of the bunya nut is: 40% water, 40% complex carbohydrates, 9% protein, 2% fat, 0.2% potassium, 0.06% magnesium. It is also gluten free, making bunya nut flour a substitute for people with gluten intolerance. 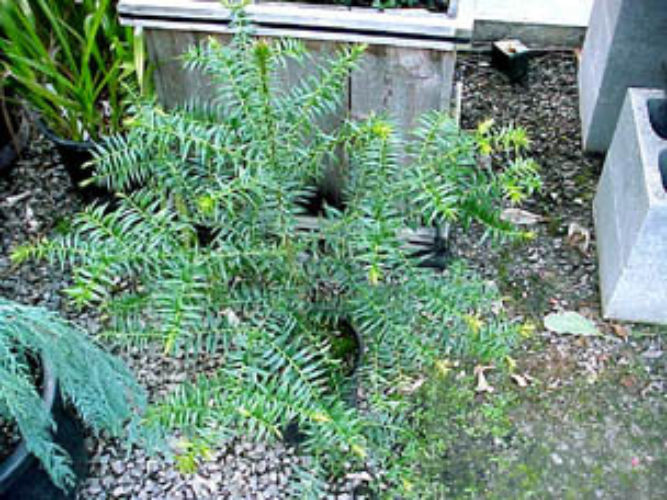 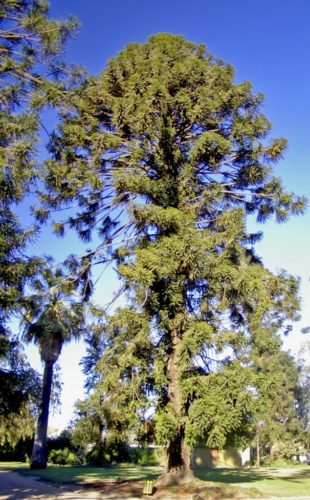 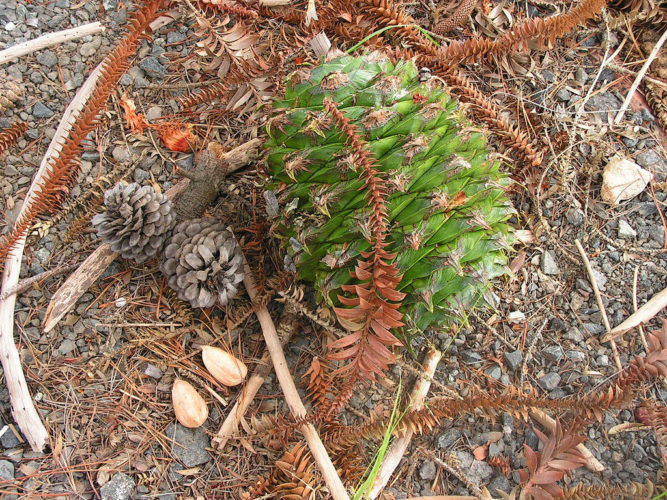 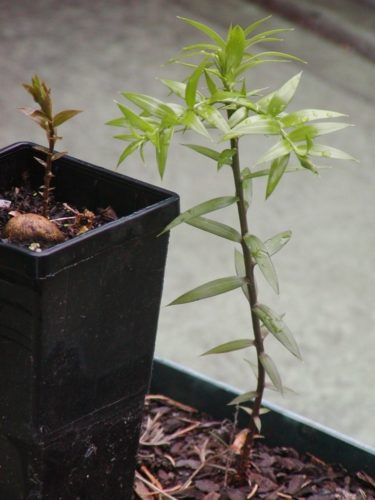 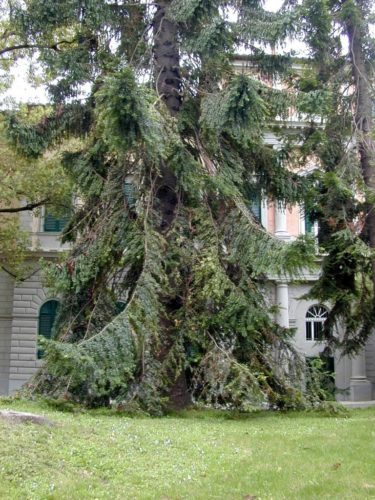 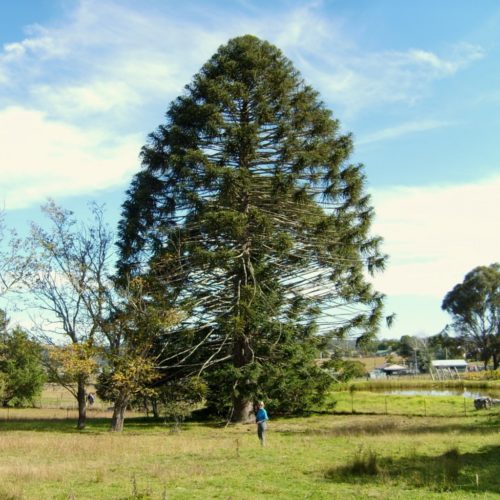 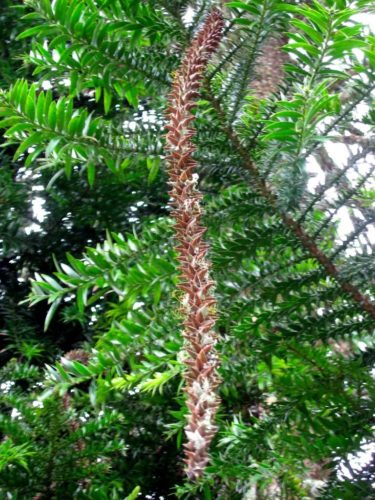 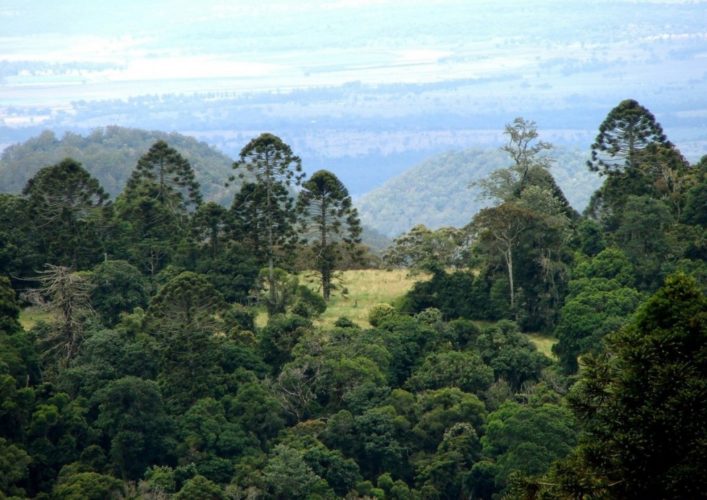 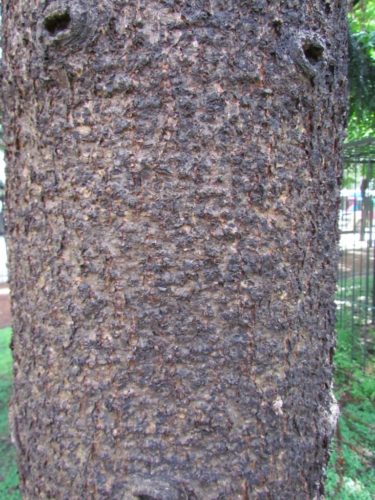 Contribute your photos to Araucaria bidwillii

What are the Bunya shoots? How do they grow etc. I found a bunch of them on the ground under a Bunya tree located on the grounds of the Ringling Museum in Sarasota, Florida. They were so unusual looking.