Abies lasiocarpa 'DuFlon' is arguably one of the smallest available cultivars of subalpine Fir. The overall structure of a mature specimen is symmetrical and globose with rich-green needles and small rounded buds, somewhat atypical for the species. After many years, a weak leader may develop; but this is a rare occurrence. Expected annual growth is less than 1 inch (2.5 cm) producing a 10 inches (25 cm) round ball of needles after 10 years. This plant is one of the absolute "must-have" cultivars for the miniature conifer collection. It is a perfect choice for a rock garden or trough planting.

[ Bob Fincham details the interesting history of this conifer in his 2011 book, Small Conifers for Small Gardens ] In, 1954 Alton and botanist, Bita DuFlon were hiking near Lake Cushman in the Olympic National Park of Washington State when Bita discovered a congested little tree that must have been more than 100 years old. They were able to transplant this tree to their home in Seattle. After some time, this plant came to the attention of Ed Lohbrunner, the owner of Lakeside Gardens, a nursery specializing in alpine plants, in Victoria, British Columbia. Lohbrunner would periodically visit the DuFlons attempting to obtain propagation material from this diminutive fir. Eventually, the DuFlons allowed Lohbrunner to take three small pieces from the miniature tree. He was able to root the three pieces and grew them on with the idea of using them as stock plants.

The original tree only lived a few years and died. It is uncertain as to what caused its death and a strange story was started by someone unknown. According to urban legend, another woman was involved in the discovery of the original plant. She and the DuFlons had an argument over the tree after it was planted on the DuFlon property. To settle the argument, the tree was cut in half in order to share it. Both halves died.

When Bob Fincham met Bita DuFlon in 1989, she told him how upset she became whenever she heard that urban legend. As a professional gardener she would never have done such a foolish thing. Bob says he still comes across that story from time to time and hopes that by telling the true story as he heard it from Mrs. DuFlon that he will "bury it."

Numerous spellings exist in the trade such as Duflon, which is how it is listed in the RHS Horticultural Database, or Du Flon. Neither spelling is correct. In the course of doing research for his book, Small Conifers for Small Gardens, Bob Fincham was able to determine the correct spelling of Alton DuFlon's name by reviewing public records. 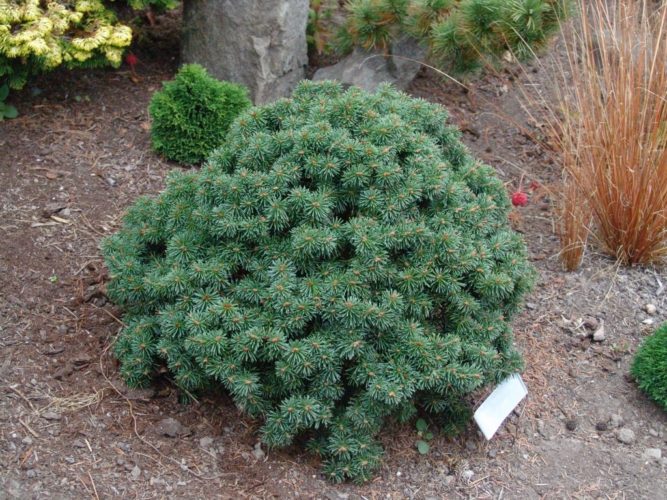 Hello,
I am Bita and Alton DuFlon's eldest daughter. I enjoyed reading this piece, and the correction to the "urban legend." I wanted to let you know that my botanist mother, Bita DuFlon, was the one who actually discovered the tree. I woukd appreciate a correction to the database.
Thank you very much,
Andrea DuFlon

hi Andrea, it's an honor to have you check in and validate the story. I made the correction as you requested.