Abies koreana 'Grübele H.B.' is dense and durable; this tiny treasure is a relatively new selection of Korean fir that grows a little faster than 'Silberkugel' or 'Silberperle'. It has short, wide needles that show off their white undersides as they rotate around the tight shoots like mini-whirligigs. White buds and bark combine with white needle reverses to produce a frosty halo for this choice, gleaming globe. Typical rate of growth in most areas is 1.5 to 2 inches (3.5 to 5 cm) per year, mostly outward, resulting in a silvery flattened globe, 18 to 24 inches (24 - 60 cm) wide and 12 inches (30 cm) tall after 10 years in the garden.

This cultivar has a very interesting and disputed history. The following is provided by Edwin Smits in communications via GardenWeb in July, 2012.

In the mid-1980s, Herbert Grübele of Weissach im Tal, Germany found a witch's broom in a specimen of Abies koreana and named it Abies koreana 'Grübele H.B.' He went on to propagate it and gradually introduce it to the nursery trade. Later on another German nursery renamed it in 'Doni-Tajuso' for commercial reasons. In the meantime, propagation material from both plants reached the U.S. under both names.

Now comes the strange part — Wittboldt-Müller Nursery of Verden, Germany received scionwood from the U.S. for an unnamed dwarf Korean fir. It is also possible that he had was forgotten the name. In either case, Kurt Wittboldt-Müller gave it the temporary name 'W.M. 006318 Am' which means "Wittbold-Müller, some number, America." Wiel Linssen, Baexem, The Netherlands visited this nursery and took home one small specimen of this new dwarf, unnamed cultivar. A few years later Wiel had grown a nice specimen of it and contacted Kurt to think of a proper name and together they gave it the name 'Kristallkugel' which means 'Crystal Globe' in English.

In this way the 'Kristallkugel' led it's own life and nobody knew its true name. For many years Edwin Smits, of Volkel, The Netherlands had all of five these allegedly different conifers planted close together in his pinetum to observe their growth habits over time. After many years, he decided that they were beginning to look very similar. His personal observations and detective work brought him to the following conclusion:

This dwarf Korean fir currently is seen with these five names:

The final conclusion is that the original name is 'Grübele H.B.' and, per the rules of nomenclature, all of the other ones must be renamed back into this name. 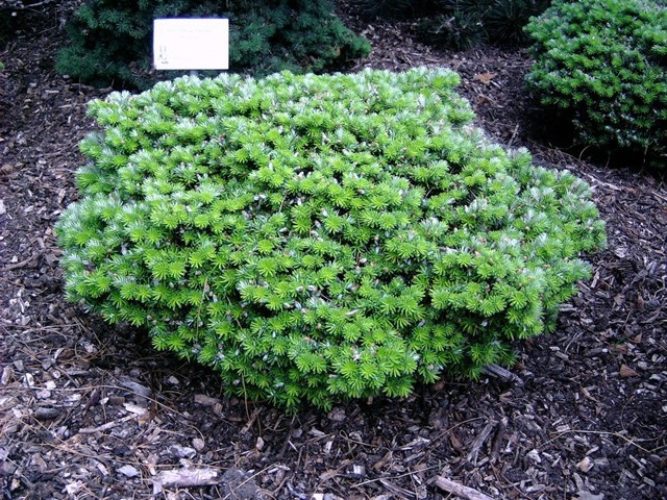